In an old joke, a driver who’s taken the wrong ramp and finds himself going against the flow of traffic on the freeway gets a call from his wife. “Be careful,” she says. “I just heard on the radio that a crazy person is driving the wrong way on the freeway!” “Just one?” he replies. “I see a lot of them.” 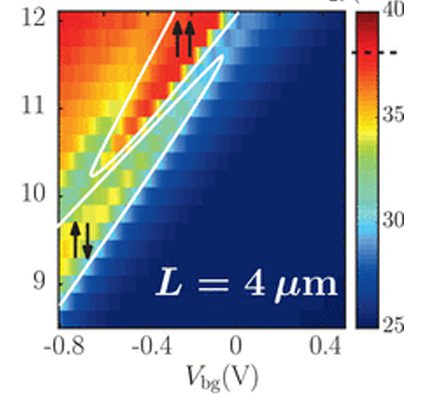 If it is actually fairly difficult for a driver to get onto the freeway driving in the wrong direction, it is even rarer for this to happen in a current of moving particles like electrons. A team at the Weizmann Institute of Science recently managed to create a system in which charged particles can and do move “against the flow.” This system was created by research students Amir Rosenblatt and Dr. Fabien Lafont, and Staff Scientist Dr. Vladimir Umansky and Prof. Moty Heiblum of the Institute’s Condensed Matter Physics Department.  The group’s findings were recently published in Science.

The basic system they used is called a fractional quantum Hall system. In a quantum Hall system, electrons flow around a two-dimensional plane, with a magnetic field running perpendicular to the plane. In such a setup, the electrons can get pushed out from the center, so the flow occurs only on the edges. In this situation, particles in the system become fractional: That is, despite being made up of electrons ‒ which, as we know, are particles that carry identical negative charges ‒ the system behaves as though it is made up of particles having charges that are fractions of the electron charge. These arise from structures formed by interacting groups of electrons, and they are variously known as imaginary particles or quasiparticles. They are nonetheless, measurable in fractions of one-third, one-fifth, one-seventh, etc., of that of the “basic” electron.

“Such a hole, or absence of a particle (or, if you like, an “overdraft”) functions in this system as a particle”
—

Theoretically, it had been predicted that a quantum Hall system that carries quasiparticles with two-thirds of an electron’s charge should produce, in addition to the imaginary particles, “imaginary holes” that have a fractional positive charge. These holes are sorts of empty places left by electrons that jump to another state. Such a hole, or absence of a particle (or, if you like, an “overdraft”) functions in this system as a particle. That is, as far as charge is concerned, the hole is not just a lack, but an oppositely charged “quasihole.” Such positively charged quasiholes, according to the theory, would move around the edges of the quantum Hall system in the opposite direction to that in which the quasiparticles are flowing.

This kind of contrarian flow had not been demonstrated until now: Like the driver in the joke, it is, in reality, quite difficult to observe particles going in the wrong direction into oncoming traffic. The success the Weizmann Institute scientists had in observing the backwards flow, just in the way the theory had predicted, relied on creating within the system an electron current that was not, on average, magnetically polarized. That is, the spins of the particles in the current were evenly organized in up-and-down arrangements.

Creating such a system ‒ in which the electrons carry two thirds of their normal charge and the current is not magnetically polarized ‒ required the know-how and experience of Dr. Umansky – one of the world’s foremost experts on fabricating the special semiconductor crystals needed for such experiments. Working in the Institute’s Braun Center for Submicron Research, he and the research group meticulously planned and produced the crystals on which the experimental system rested.

The researchers found that the flow of holes in the opposite direction to the electron “traffic” is weaker than the current – only about 10% of it – and it goes down to the point of disappearance as they gain distance. That is, the phenomenon can be observed and measured only when the quasiholes move very small distances – up to about four micrometers. Heiblum says that the fact that the experiment was so successful in recreating the predictions of the theory gives added support to our understanding of the behavior of strongly interacting quantum particles.

Prof. Moty Heiblum’s research is supproted by the European Research Council. Prof. Heiblum is the incumbent of the Alex and Ida Sussman Professorial Chair of Submicron Electronics.