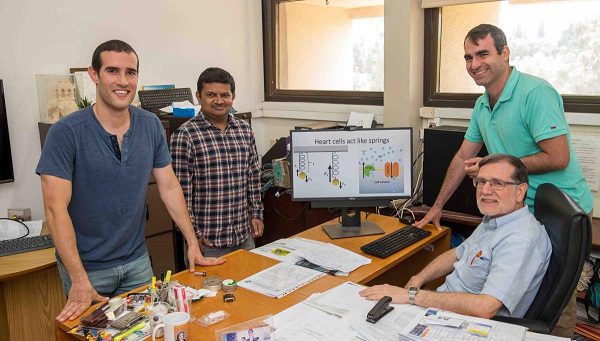 Take a heart cell called a cardiomyocyte, put it on a soft gel in a lab dish, and it will beat, beat, beat like a tiny heart. If you take two cardiomyocytes and grow them near one another, they will coordinate their rhythm to beat together. What is it about these cells that drives them to pulse in synchrony, even when they are separated from the complex system of the heart?

Such experiments with cardiomyocytes demonstrate their mechanical nature. Prof. Sam Safran and Ohad Cohen of the Weizmann Institute of Science’s Chemical and Biological Physics Department recently showed that, fundamentally, this mechanism can be couched in terms of basic physics – specifically the physics of springs, masses and treadmills.

Cardiomyocyte beating is controlled by pulses of calcium ions, and for this they have a special walled-off organelle called a sarcoplasmic reticulum (SR) that functions as a storehouse for these ions. The membrane of the SR has two separate ion passageways: outgoing channels that open and close, letting ions flow from the high concentrations in the SR to the lower ones in the cell’s cytoplasm; and pumps that return the ions in the opposite direction to storage. But describing the arrangement does not account for the beating: On its own, the pump-and-channel system should reach some kind of stability, with the outflow and inflow keeping the number of calcium ions in the cytoplasm in a steady state.

To solve the riddle of the beating mechanism, the researchers first considered the channels. While the pumps work steadily, the channels tend to fling themselves open and then shut. This is because some of the first ions out of the gate attach themselves to the edges of the channel, an act that keeps the channel wide open for a while. Then the channel’s response to the calcium slowly relaxes over time.

In searching for a mechanical analogy to this cycle, biophysicists Cohen and Safran hit upon the physical laws of a spring: “Imagine there is a spring hanging from the ceiling, with a weight attached to its end,” says Cohen. “If I lower the mass slowly, it stays in place. This is analogous to the steady state. But if I lift it and let it go, it will continue to oscillate up and down around that point. This is due to inertia – the mass’s tendency to keep moving, propelling it past the point where the gravity pulling the mass down cancels the force of the spring pulling it up. The way the channels remain open for some time after releasing a large number of calcium ions looks, from the physics standpoint, very much like the inertia that keeps the mass on the spring going up and down. The quick shot of calcium ions ‘lifts it up’ so that it overshoots the equilibrium point.”

The researchers, in a paper that was recently published in Physical Review Letters, showed that the similarity is more than incidental. Applying the physical formulas that explain the actions of a spring can also predict the pulses of calcium ions that cause the heart cell to beat. “Comparisons like this can lead to new insights into the biophysics of a system,” says Safran. “We showed that it is not just the mechanics of opening and closing; it is the rate of change in the velocity (or ion concentrations) that draws the system toward a change of direction (or behavior of the channel).”

A mass on a spring, of course, will undergo smaller and smaller oscillations until it comes to rest, while the cardiomyocyte, given the right conditions, will keep beating away. That is, the cardiomyocyte mechanism has to overcome the “friction” that brings masses on springs to rest and would, eventually, bring an end to the calcium cycles. In other words, energy has to enter the system to keep the oscillations going.

Safran and Cohen imagined that this time, the spring was attached to a wall and the mass at its other end was sitting on a sort of treadmill. The treadmill would be continually moving under the mass, conveying it forward, but the spring would slow that movement and snap the mass back as it reached its maximum stretch.

The activation of the channel is somewhat similar to a treadmill that increases the velocity of the mass. The difference is, however, that in the calcium channel this force is an integral part of the system itself, since the calcium released by the channels is what induces the additional flow of ions through them. Despite this difference, the researchers found that the “spring-and-treadmill” equation not only elucidates the oscillations seen in the beating cells, but also explains the time scale of about one second for the heartbeat.

“As physicists, we ask whether there can be a simple explanation for the complicated phenomena we see in biology,” says Safran. “By lumping several biochemical effects into a small number of physical parameters, we have shown that analogies with purely physical systems are a powerful tool that can reveal new aspects of mechanisms such as beating. We think that our method could work for other systems of importance in biology, and that it might scale up as well, and extend to tissues and organs – possibly even the beating of the heart, as a whole.”

Prof. Samuel Safran’s research is supported by the Henry Krenter Institute for Biomedical Imaging and Genomics. Prof. Safran is the incumbent of the Fern and Manfred Steinfeld Professorial Chair.