Subscribe today
Donate
Donate
Menu
> Press Release > Where the Blood-Brain Barrier Breaks Down
Press Release | News From The Institute
Where the Blood-Brain Barrier Breaks Down
The cells that keep blood vessels in the pituitary permeable to hormones may hold the key to future drug delivery
Source: The Weizmann Institute of Science

The so-called blood-brain barrier is a physical seal of tightly packed cells lining the blood vessel walls – molecules above a certain size cannot get in or out. But hormones and blood-borne proteins do have passage. The pituitary, at the base of the brain, contains “leaky” blood vessels that permit certain bulky molecules to pass in either direction. Researchers at the Weizmann Institute of Science have now revealed how the pituitary’s blood vessels open “windows” to the rest of the body, despite their common origin in vessels that have a blood-brain barrier. Their findings, which were recently published in Developmental Cell, may have implications for treating hormone imbalances or inflammatory diseases in the central nervous system, as well as for possible means of delivering drugs to the brain.

“Our findings go back to the studies of the pituitary in the early 20th century, which laid the foundations of modern neuroendocrinology,” says Prof. Gil Levkowitz of the Institute’s Molecular Cell Biology Department. “At first it was believed that the pituitary was the source of the hormones vasopressin and oxytocin. In the 1920s, however, Berta and Ernest Scharrer, in their studies of a small freshwater fish, established the concept of neurosecretion. They hypothesized that some of the brain’s hormones might be produced by neurons in a region of the brain called the hypothalamus, further suggesting that these hormones were transported along nerve fibers and then secreted into blood vessels in the pituitary gland.

The hormones – oxytocin and vasopressin – were among the first discovered: Vasopressin was found to regulate kidney function and, later, blood pressure; oxytocin to play a role in inducing uterine contractions in birth and lactation during breastfeeding, though each has more recently been found to modulate brain activity, including social behavior, stress and appetite. In the back of the pituitary is a section called the neurohypophysis (NH), which is the conduit through which oxytocin and vasopressin are released from the brain into the body’s general circulation. 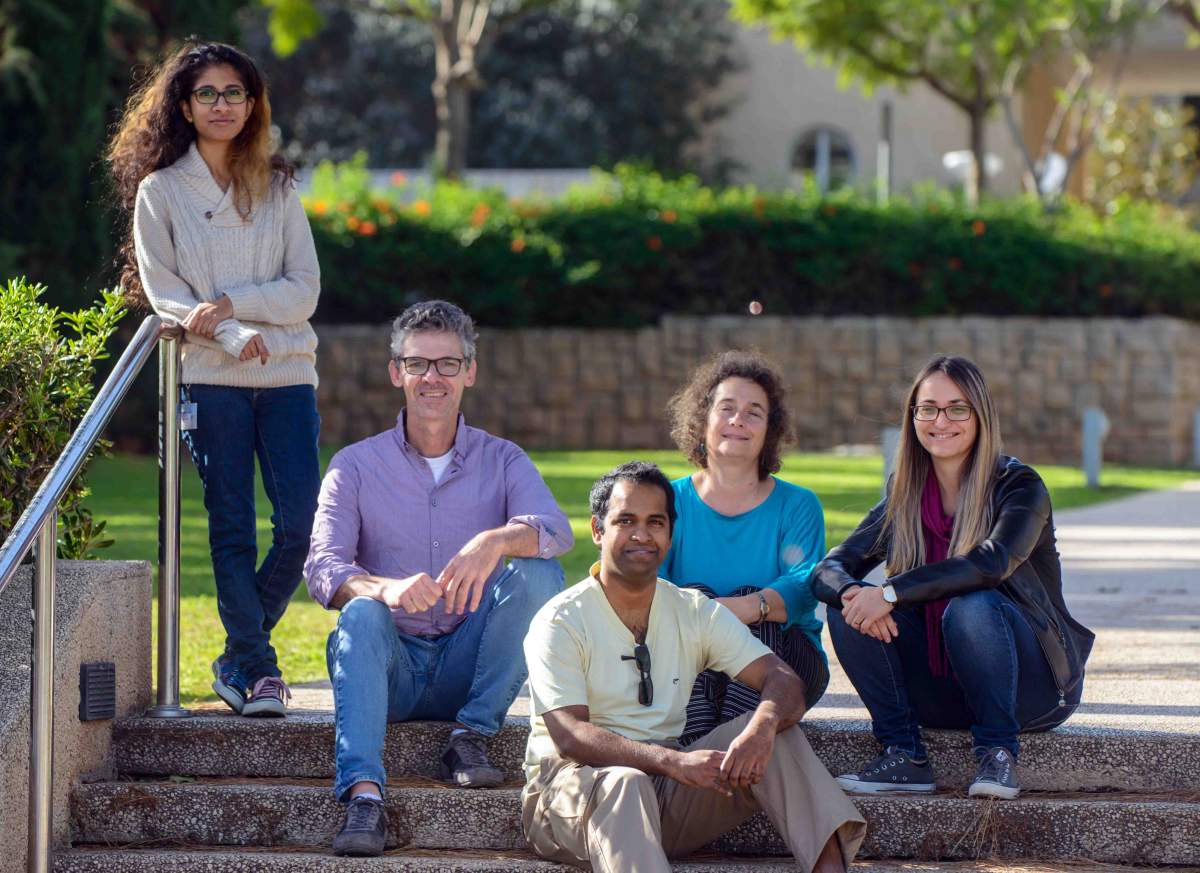 Postdoctoral fellow Dr. Savani Anbalagan and research student Ludmila (Lusi) Gordon in Levkowitz’s lab group focused their investigation on the NH, where the long extensions – or axons – of the hypothalamus nerve cells meet the small blood vessels – capillaries – which contain tiny openings called fenestrae (which is Latin for windows). Sitting between the axons and capillaries in the NH are cells known as pituicytes. Pituicytes envelop the ends of the axons, and the theory was that these cells loosen their grasp to release hormones in response to signals from below. For example, if the body suffers from dehydration, they might unleash vasopressin to lower water absorption by the kidney.

But the construction of the capillaries that absorb the hormones was still unexplained: Despite a century of research into the development and function of the NH, it was still not understood how the windowed capillaries in the pituitary grow out of larger blood vessels in which the blood-brain barrier is the rule. The researchers in Levkowitz’s lab thought that pituicytes, which are found only in the NH, might also play a role in directing the unique structure of the capillaries there.

Windows out of the brain

The team worked with zebrafish embryos, whose transparent brains enable real-time visualization of the NH, including the unique blood vessel within it. They first set out to identify the NH structure and its pituicytes in the fish’s brains. The team found that the organization of the fish NH is nearly identical to that of humans. “This is a primitive means of neuro-hormonal transmission between the brain and the body, but it works so well, evolution did not change it,” says Anbalagan. Next, the researchers sequenced the genes expressed in the pituicytes, and they then created transgenic fish in which they could interfere with some of the molecules secreted by these cells, so as to understand the function of each.

Levkowitz and his group identified two types of signaling molecules produced in the pituicytes that make the capillaries permeable in this part of the brain. Interfering with these signals reduced the permeability (“leakiness”) of the vessels, which then formed a tight blood-brain barrier. “The fenestrae are dynamic structures,” explains Gordon. “These two molecules are active in embryonic development as well as in the adult animal, so that windows are continuously opened and maintained.” The researchers found that one of the signals promotes a “permeable fate” in the blood vessels by regulating genes within the cells that form the fenestrae; and the other blocks the formation of the blood-brain barrier. “It’s like wearing both a belt and braces,” says Levkowitz, “the body ensures these windows are opened by using two means of support.” 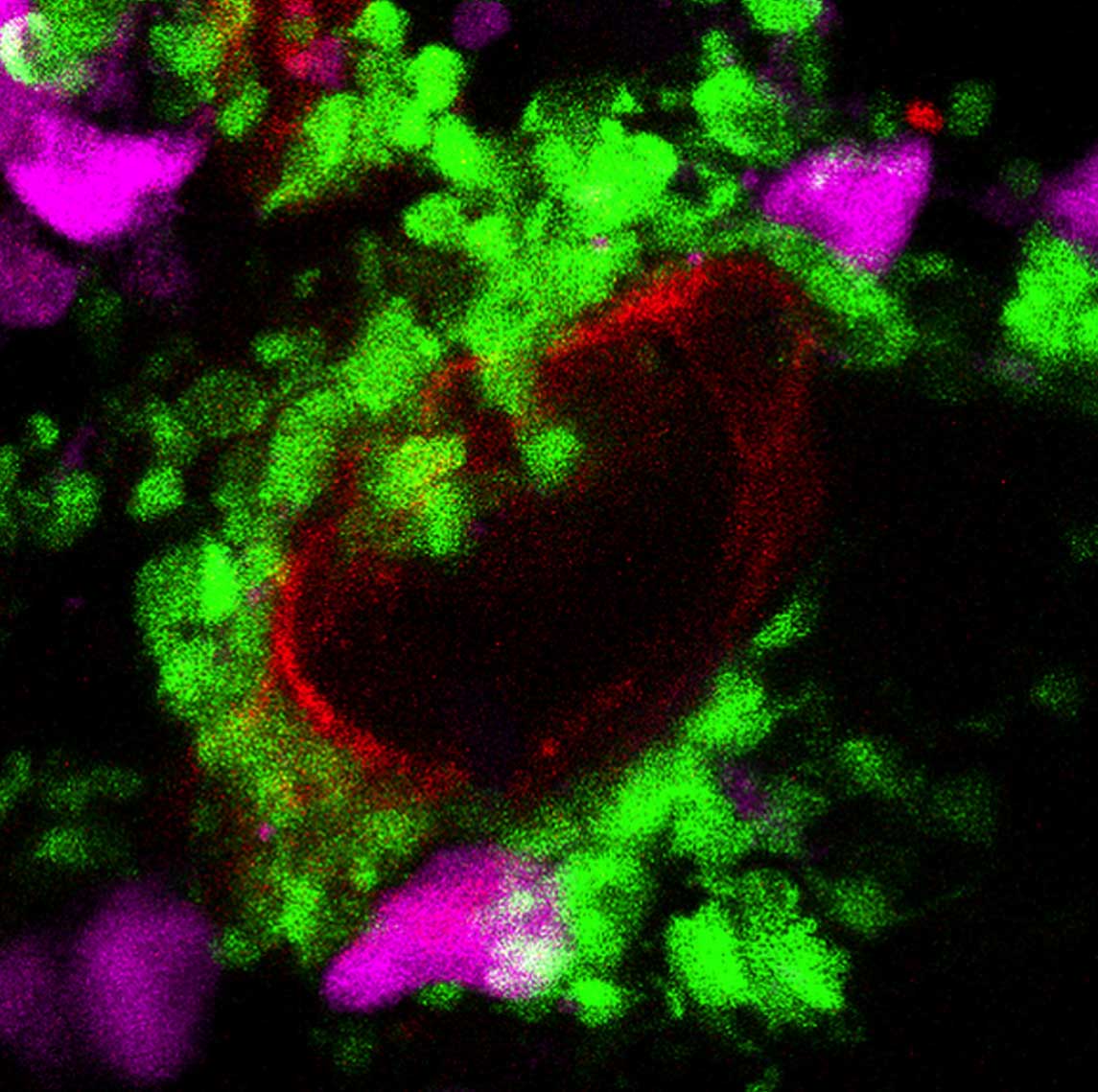 The neurohypophyseal ‘triumvirate’: pituicytes (magenta) intermingled in between the neuronal termini (green) and the blood capillary (red) within the zebrafish neurohypophysis

In reading over the roster of molecules secreted by the pituicytes, something else caught the scientists’ attention: The list was highly similar to the complement of molecules secreted in much of the rest of the brain – the parts protected by the blood-brain barrier – but only during inflammation. Such gene expression patterns are seen, for example, in autoimmune diseases, neurodegeneration and stroke. What’s more, the cells that produce the pro-inflammatory molecules in the protected parts of the brain are closely related to the pituicytes. They are both cells known as glia, which perform numerous “maintenance” roles in the brain. “We think that the normal condition for the pituitary – permeability – resembles the disease condition for other parts of the brain, which only open their gates in a crisis,” says Anbalagan.

Indeed, when the researchers administered an anti-inflammatory drug to the zebrafish, they found that the expression of the pituicyte genes was blocked, as was permeability in the NH capillaries. This provided further evidence that the pituicytes use mechanisms of inflammation to open the fenestrae in the nearby capillary blood vessels.

Understanding the connection between inflammation on the one hand and permeability on the other may further understanding of inflammatory processes in the brain and of the proper functioning of the pituitary. It may aid, as well, in developing new means of getting large-molecule drugs across the blood-brain barrier.