Today, the axiom that there is more to what we see than meets the eye isn’t just a philosophical statement about ascertaining reality. For physicists working in the microscopic realm, this is the concept that will lead us into a new quantum revolution.

The devices and technology that we take for granted today—laptop computers, the Internet, mobile phones, GPS gadgets, superconductors, and lasers—are the products of a scientific sea change that began a century ago. In this so-called “first quantum revolution,” physicists figured out the laws governing microscopic particles like atoms, electrons, and photons, and worked with engineers to translate their insights into real-world applications. But while these technologies have become ubiquitous in modern life, and most of us feel like we can barely catch up before the next one has arrived to confound us, this is just the beginning.

Microscopic objects don’t comply with the laws of classical Newtonian physics—which describe the mechanical principles of visible objects, like clouds, coffee cups, and even cells. The mechanics of microscopic objects also contradict our everyday experience. Unlike macroscopic objects, which can exist in only a single physical location at any given time—they are where they are and can’t be found anywhere else—the individual microscopic particles that compose our macroscopic, human-sized world can exist in multiple realities simultaneously, and we can only speak of where a particle is in terms of probability. This phenomenon is known as superposition. Today, physicists are hard at work characterizing this and other phenomena of the microscopic world, hoping to recognize their full potential—and that means there’s a second quantum revolution in the making.

“Superposition is where science gets really weird. Some nanoparticles can be thought of as particles like waves, which can have different positions and energies at different points and move at different speeds—and even be in two different places at once.”
— says Prof. Roee Ozeri of the Department of Physics of Complex Systems

Superposition offers a kind of flexibility of space and time to matter, which is why physicists view it as one of the two key phenomena that lie at the heart of quantum behavior. The other is the fact that quantum particles can be deeply connected without direct physical interaction. Quantum particles can’t be characterized independently without their partners—like long-distance lovers who see the other as an extension of themselves. That principle is called entanglement.

These two principles—superposition and entanglement—form the basis of the second quantum revolution. In this new era, quantum scientists are working to develop the means to observe, manipulate, and control the behavior of a single electron, photon, or other microscopic bit; moreover, they are working to control the quantum behavior of systems composed of many atoms or electrons, engineered from the bottom up. 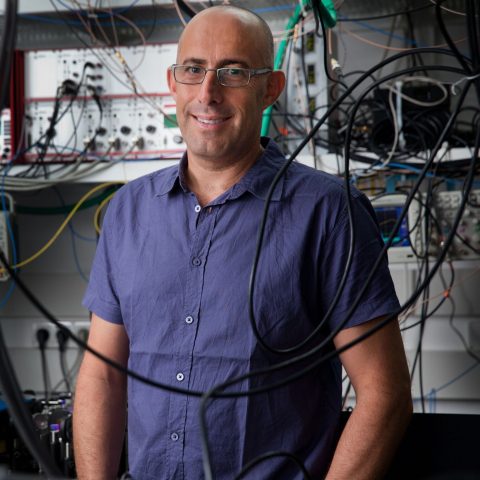 What are the implications of quantum science? The second revolution is expected to lead to technologies capable of doing everything our current technology can do—but much faster, and with staggeringly higher efficiency and power, solving and accomplishing tasks that aren’t even fathomable today. Numerous fundamental aspects of existence that could not be sensed, recorded, computed, or analyzed using classical systems—features too intricate, complex, and massive, or alternatively, too sensitive and delicate to be observed—may now be amenable to second-revolution quantum science. The hoped-for result will be better, faster everything: encryption and transfer of information, sensors, computers, and a myriad of devices.

Quantum computers are expected to outperform classical computers on computational tasks thanks to their ability to calculate an exponentially large number of computations simultaneously. Quantum information technology is set to ensure tighter privacy and security through astonishing degrees of encryption. Quantum simulators will be a boon to science as they will allow scientists to simulate materials or chemical compounds, facilitating the development of new intelligent materials, from solar cells to nano-pharmaceuticals. Meanwhile, quantum sensors will be a leap forward for space and geographical studies, via ultra-sensitive and precise measurements of subatomic particles. Quantum science will shed light—quite literally—on gravitational fields, magnetic fields, and fundamental physical constants on the minutest of scales.

Among commercial entities and in the halls of academia, the race is afoot to create the first quantum devices.

At the Weizmann Institute, physicists and computer scientists are leading the way. They already have a history of firsts, starting with WEIZAC, the first computer in the Middle East and one of the first in the world; also, the RSA encryption algorithm developed in the 1970s by Prof. Adi Shamir and two MIT colleagues that became the basis for secure computer transactions. Today, the Institute is home to leading experts in both experimental and theoretical physics who conduct cutting-edge research on quantum systems. The two areas of physics that are laying the foundation for the quantum era are atomic, molecular, and optical systems (AMO), and condensed matter systems (CM).

The promise of photons

Many of the hi-tech devices we use today operate thanks to billions upon billions of photons—the smallest indivisible quantum (a piece, or bit) of light. Why do photons matter? It turns out that photons are the best candidates for long-distance quantum-information transfer: they are extremely light, capable of super-fast travel, barely interact with the environment, and can be directed via optical fibers. Somewhat surprisingly, the most powerful effects occur when utilizing a single photon. 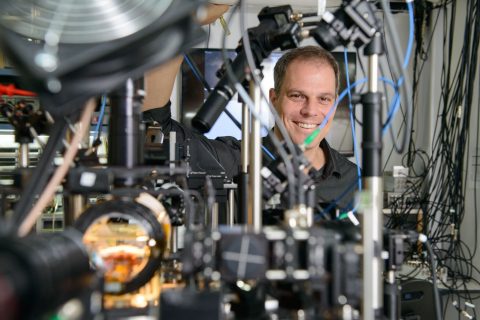 At the same time, photons’ very lack of interaction has stymied scientists hoping to build an Internet around them. Prof. Dayan and Dr. Ofer Firstenberg of the Department of Physics of Complex Systems are trying to build devices and transistors based on photons. They have devised ways of forcing photons to interact at will and have found a transistor for light, by having atoms mediate the interaction between the photons. Such techniques have the potential to enable the execution of quantum algorithms using light, and could help merge quantum computers and the quantum Internet into the communication force of the future. In a recent study published in Nature Physics, Prof. Dayan described how he was able to create a “logic gate” in which a photon and an atom automatically exchange the information they carry, which has key implications for creating quantum computers.

The hidden world of electrons

For decades, Weizmann physicists have been experimenting with electrons, atoms, and all that they are capable of: their interaction, ability to split, and distinct behavior. Advances in this field, condensed matter physics, have led to an important focus on so-called electron interferometry—the study of the wave-like properties of electrons and how they interact with their environment. Prof. Moty Heiblum of the Department of Condensed Matter Physics and many of his colleagues have advanced the field to the point where quantum electrons can be controlled, manipulated, and exploited.

This field of research has led to the development of sophisticated semiconductors and modern nanotechnology. But there’s much more ahead.

The relatively new field of topological states of matter holds promise for creating quantum computers. Topological materials and states involve a kind of order very different from conventional bulk materials, in that electrons on the surface of a material behave differently than those inside the material itself. The special nature of such topological materials and states can be leveraged for the creation of new materials. Dr. Binghai Yan of the Department of Condensed Matter Physics straddles the world of theory—figuring out how such states work—and experimentation: trying out the materials to synthesize new materials and devices such as quantum computers. 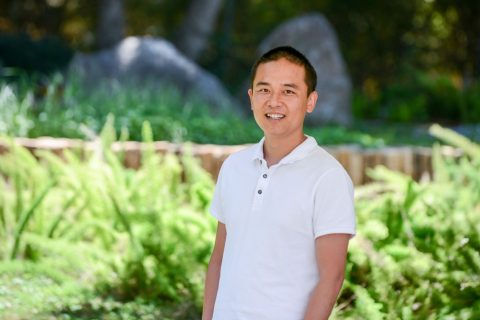 A native of China, Dr. Yan was recruited several years ago, drawn to the Weizmann Institute because of its rare expertise in the microscopic realm and in topological materials in particular. Dr. Yan is collaborating with pioneers in the field, including Prof. Ady Stern of the Department of Condensed Matter Physics, who has elucidated how topological states work in electronic systems, which manifest electronic properties that are remarkably indifferent to changing environmental parameters and conditions—properties that may be of particular importance in the design of quantum computers.

Dr. Ofer Firstenberg is supported by the Laboratory in Memory of Leon and Blacky Broder, Switzerland, the Sir Charles Clore Research Prize, and the European Research Council.

Prof. Moty Heiblum is the incumbent of the Alex and Ida Sussman Professorial Chair of Submicron Electronics.

Prof. Roee Ozeri is supported by the Clore Center for Biological Physics, the Crown Photonics Center, and the European Research Council.

Prof. Ady Stern is supported by The Benoziyo Endowment Fund for the Advancement of Science, the Veronika A. Rabl Physics Discretionary Fund, the Zuckerman STEM Leadership Program, and the European Research Council.

Dr. Binghai Yan is supported by the Ruth and Herman Albert Scholars Program for New Scientists and the Willner Family Leadership Institute for the Weizmann Institute of Science.