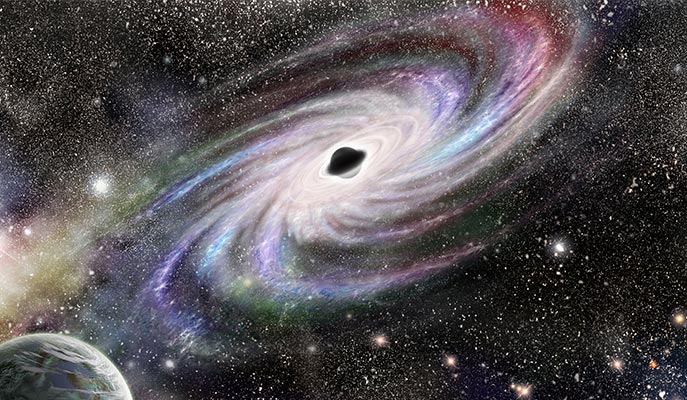 Illustration: Black holes in in the centers of galaxies swallow gas and nearby stars

So dense that their gravitational pull folds space around them and any object crossing their “event horizon” is swallowed up forever, black holes even consume any light that gets too close. These monstrous objects distort the paths of bodies far beyond their event horizons, and they grow by taking in interstellar gas and whole stars.

Two types of black hole have been detected in the universe. The first, “lightweight” black holes – with masses of around ten times that of our sun – is created when massive stars die and collapse inward on themselves. The second type is supermassive – a million to a billion times the mass of our sun. Supermassive black holes are found in the centers of galaxies; one is sitting in the middle of our own galaxy, the Milky Way.

The question is: How did the supermassive black holes get that way? Their eating habits suggest that they were once much lighter “seeds,” generated in the extreme conditions of the early universe – perhaps even as light as today’s lightweight black holes. If that is the case, however, and the enormous black holes grew by gradually taking in mass, there should be a range of sizes between light and supermassive: Midsized black holes should be observed with masses between hundreds and hundreds-of-thousands of times that of our sun.

Closing the gap in our understanding

Indeed, since the 1960s a hunt has been underway for such midsized black holes. But the numerous observations and measurements conducted to date have come up empty.

The riddle of the missing black holes suggests that there may be large and disturbing gaps in our understanding of the basic processes by which galaxies and black holes evolve. Indeed, many theories predicting cosmic blasts of light or gravitational waves depend on the presumed existence of midsized black holes that eat stars or other black holes.

New research conducted by Prof. Tal Alexander of the Weizmann Institute of Science’s Particle Physics and Astrophysics Department and his former student Dr. Ben Bar-Or of the Institute for Advanced Study, Princeton, may help fill that gap. In a paper published in Nature Astronomy, the two showed that, given a couple of likely assumptions, lightweight seeds should undergo a sort of rapid weight gain, gobbling up stars around them until they attain a mass of around a million suns – the lower limit for supermassive black holes. Alexander and Ben-Or further showed that this result is general: It is applicable to all seed black holes, independent of their mass at the outset or the cosmological era in which the eating binge occurs.

Alexander says: “The calculations we performed based on the theory of how stars move around black holes and a few additional initial assumptions show that the process of ‘fattening’ lighter seed black holes is inescapable. And these black holes would have continued to snack on gas, stars and lightweight black holes, becoming the behemoths we see today. So in our era, all of the seed stars should already be supermassive. To find midsized black holes, we will have to develop observational tools good enough to detect these ‘invisible’ stars in the earliest cosmic periods, before they had a chance to grow.” 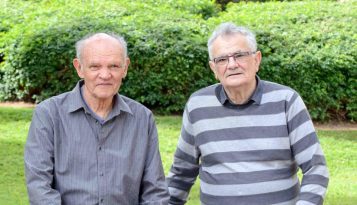