Being constantly hungry, no matter how much you eat, is a daily struggle for people with genetic defects in the brain’s appetite controls, and it often ends in severe obesity. In a study published in Science on April 15, researchers at the Weizmann Institute of Science, together with colleagues from the Queen Mary University of London and the Hebrew University of Jerusalem, have revealed the mechanism of action of the master switch for hunger in the brain: the melanocortin receptor 4, or MC4 receptor for short. They have also clarified how this switch is activated by setmelanotide (Imcivree), a drug recently approved for the treatment of severe obesity caused by certain genetic changes. These findings shed new light on the way hunger is regulated and may help develop improved anti-obesity medications.

The MC4 receptor is present in a brain region called the hypothalamus – within a cluster of neurons that compute the body’s energy balance by processing a variety of energy-related metabolic signals. When the MC4 is activated, or “on” – as it normally is – it sends out commands that cause us to feel full, which means that from the brain’s perspective, our default state is satiety. When our energy levels drop, the hypothalamic cluster produces a “time to eat” hormone that inactivates, or turns off the MC4 receptor, sending out a “become hungry” signal. After we eat, a second, “I’m full” hormone is released. It binds to the same active site on the MC4, replacing the hunger hormone and turning the receptor back on – bringing us back to the satiety default. Mutations that inactivate the MC4 cause people to feel constantly hungry.

MC4 is a prime target for anti-obesity drugs, such as setmelanotide, precisely because it’s a master switch: turning it on can control hunger while bypassing all other energy-related signals. But until now it was unknown how exactly this hunger switch works.

Electron microscopy images representing different views of the MC4 receptor bound to setmelanotide, in complex with proteins activated by the binding

The new study began with the predicament of one family, in which at least eight members, plagued by persistent hunger, were severely obese – most of them with a body mass index of over 70, that is, about triple the norm. Their medical history came to the attention of Hadar Israeli, a medical student pursuing PhD studies into the mechanisms of obesity under the guidance of Dr. Danny Ben-Zvi at the Hebrew University of Jerusalem. Israeli was struck by the fact that the family’s plight was due to a single mutation that ran in the family: one affecting the MC4 receptor. She turned to Dr. Moran Shalev-Benami of Weizmann’s Chemical and Structural Biology Department, asking whether new advances in electron microscopy could help explain how this particular mutation could produce such a devastating effect.

Shalev-Benami decided to launch a study into the structure of MC4 receptor, inviting Israeli to join her lab as a visiting scientist. Together with Dr. Oksana Degtjarik, a postdoctoral fellow in the lab, Israeli isolated large quantities of pure MC4 receptor from cell membranes, let it bind with setmelanotide and determined its 3D structure using cryogenic electron microscopy. The study was conducted in collaboration with the teams of Dr. Peter J. McCormick from the Queen Mary University of London and of Prof. Masha Y. Niv from the Hebrew University of Jerusalem. 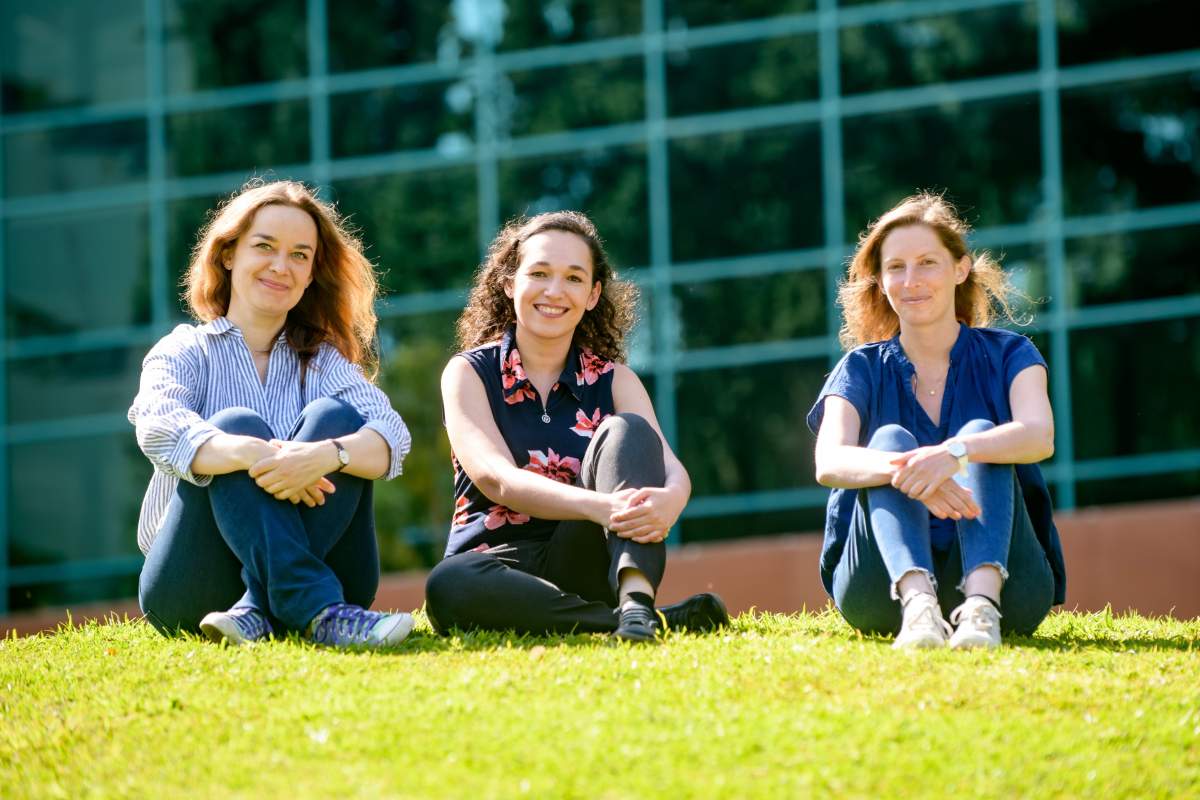 The 3D structure revealed that setmelanotide activates the MC4 receptor by entering its binding pocket – that is, by directly hitting the molecular switch that signals satiety, even more potently than the natural satiety hormone. It also turned out that the drug has a surprising helper: an ion of calcium that enters the pocket, enhancing the drug’s binding to the receptor. In biochemical and computational experiments, the scientists found that similarly to the drug, calcium also assists the natural satiety hormone.

McCormick: “Calcium helped the satiety hormone activate the MC4 receptor while interfering with the hunger hormone and reducing its activity.”

“This was a truly unexpected finding,” Shalev-Benami says. “Apparently, the satiety signal can successfully compete with the hunger signal because it benefits from the assistance of calcium, which helps the brain restore the ‘I’m full’ sensation after we eat.” 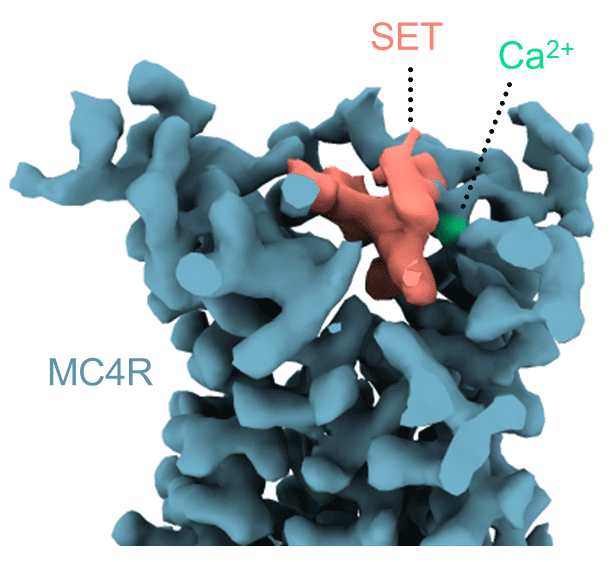 MC4’s structure also revealed that the drug’s entry causes structural changes in the receptor; these changes appear to initiate the signals within the neurons that lead to the sensation of fullness. The study has explained how mutations in the MC4 receptor can interfere with this signaling, leading to never-ending hunger and ultimately obesity.

Moreover, the scientists have identified hotspots that crucially distinguish MC4 from similar receptors in the same family. This should make it possible to design drugs that will bind only to MC4, avoiding side effects that may be caused by interactions with other receptors. 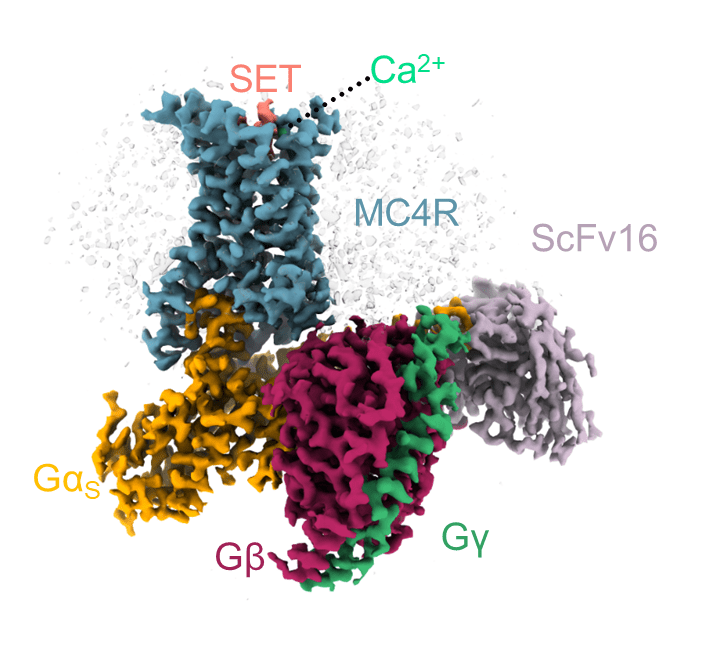 3D structure of a complex formed by the MC4 receptor (blue) and several proteins that it activates, with a setmelanotide molecule (pink) and a calcium ion (green) in the MC4's binding pocket

“Our findings can help develop improved and safer anti-obesity drugs that will target MC4 with greater precision,” Shalev-Benami says.

Dr. Moran Shalev-Benami’s research is supported by the Tauro Career Development Chair in Biomedical Research; the Ilse Katz Institute for Material Sciences and Magnetic Resonance Research; the Zuckerman STEM Leadership Program; the Joseph and Wolf Lebovic Lab; and the Abisch Frenkel Foundation for the Promotion of Life Sciences.