Only a few vaccines – for example, against polio and rotavirus – can be given orally. Most must be delivered by injection. Weizmann Institute of Science researchers suggest this may be, in part, because the training program of the immune cells in the gut takes place under harsh conditions. Dr. Ziv Shulman and research student Adi Biram investigated this process for the gut-based cells involved in long-term immunity using a novel imaging method that captures all of the immune cells’ niches within a single organ. Their findings, published today online in Nature Immunology provide new insights that may, in the future, lead to the design of more effective oral vaccines. 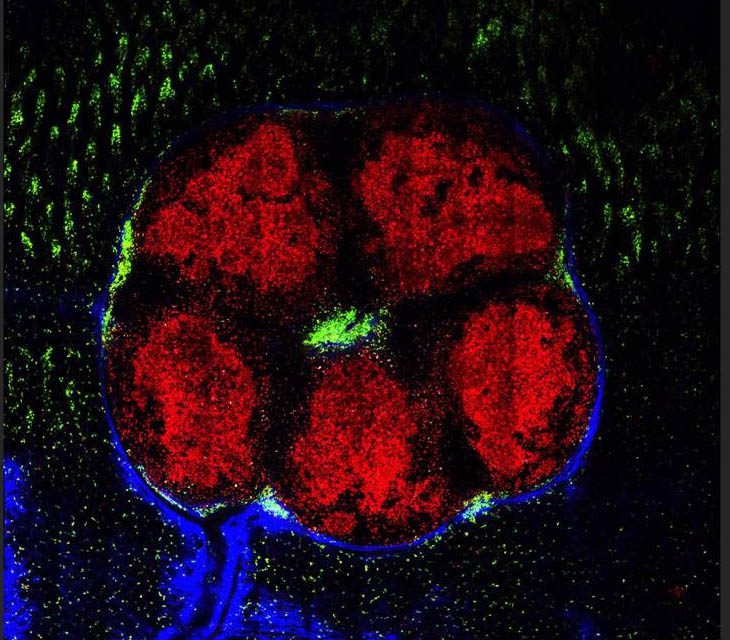 Lymphoid organs in the small intestines. Red: B cells aggregated in the “training centers.” Green: cells with the ability to secrete effective antibodies exiting the centers for the intestinal tissue

The effective, long-lasting protection we expect from a vaccine originates in a response that is undertaken by immune cells called B cells. Each of these immune cells secretes one antibody –molecules that bind a specific target. Following exposure to a vaccine or invading pathogen, a preparation program selects the B cells with the antibodies most fit to attack the particular threat, admitting them to special training niches within the lymph nodes. There, these cells undergo rounds of division and mutational changes until a pool of finely-honed, “high-affinity” antibody-producing cells is created; these cells persist in the body, providing immunity even to future challenges from this specific threat.

“”
— Within this setting, the antigens delivered in a vaccine would be lost in the crowd

Shulman, who is in the Institute’s Immunology Department, has investigated this process in the lymph nodes that are found in nearly all the body’s peripheral tissues. But the lymphoid organs in the intestines, in addition to hosting B-cell training against pathogenic diseases, also keep the gut bacteria in check, making it difficult to discern each function separately. And the specialized immune niches within the organs are so small and well hidden, it is hard to study them with the standard methods. He and Biram developed a way to remove and image the gut lymph organs, borrowing the “clear brain” method from neurobiology in which tissue is made transparent and the organ then viewed with standard light sheet fluorescence microscopy. This method, says Biram, enabled them to capture all of the immune niches in an entire organ and to study how these compartments contribute to the emerging immune response.

Working on a more socialist principle

The researchers then analyzed the gut lymphoid organs from mice that had been immunized orally.

“We found that the lymph organs in the gut operate by a different set of rules than those in the peripheral lymph system,” says Shulman. In fact, the gut lymph system does not collect antigens through tissue drainage, as happens in the peripheral lymph nodes, but rather by active uptake of vaccine or pathogen particles from inside the gut. And if the peripheral system is a “capitalist” one that aims to select and produce the most effective antibodies quickly, the gut system works on a more socialistic principle, at least in the beginning. That is, cell producing antibodies with any level of affinity, at all, are allowed to divide and secrete antibodies in response to the threat during the early response. Only later do some with higher affinity gain admittance to the training grounds for further improvement.

Next, the group used their method to observe the gut lymph-based B cells together with “trainer” cells that select the high-affinity variants. They found that these cells physically interact with the B cells within small niches just as they do in the peripheral lymph nodes. In other words, the “training manual” was there and opened to the right page. Unlike in the peripheral lymph nodes, however, the trainers in the gut seemed to lack a crucial piece of information: They were unable to distinguish between high- and low-affinity antibodies.

This limitation, the researchers thought, might lie in the complex environment in which the lymph organs operate: They are exposed to immense amounts of antigens from the ever-present gut bacteria. Within this setting, the antigens delivered in a vaccine would be lost in the crowd, diluted to the point it would be impossible to select B cells based on antibody affinity. When the researchers artificially increased the antigen in the mouse gut, they were able to reactivate the trainer-cell program for selecting the fittest B cells.

“The antibody response in the gut takes place in two stages. The first is an all-out ‘do the best we can with what we have’ reaction. At this stage, affinity-based selection is delayed, and both low- and high-affinity antibodies are produced. For the second phase, the immune cells must make it into niches in which the proper antigens have accumulated over time, so that affinity training can take place. As opposed to the peripheral lymph system, the antigen levels within the gut’s immune cell niches are mostly too low to stimulate efficient antibody generation,” says Shulman.

Shulman and Biram say that further research into the rules controlling the gut lymphoid organs could lead to new ways of targeting antigens and recruiting B cells into the affinity training programs, thus enabling the development of new or improved oral vaccines.