Weizmann Institute testamentary donor Sharen Werk’s obituary describes her as “a most remarkable, independent, well respected, and perpetually optimistic lady who brought joy and comfort to all who knew her.”

Very dear friend, Robert C. Kay ― a Corporate Director and Business Advisor ― shared similar sentiments when he recently spoke about Sharen, describing her as remarkably generous, adding that he is only becoming aware of the full extent of her lifetime of generosity now that many of those touched by Sharen are coming forward.

“She was herself very giving and caring in helping people, whether she knew them well or not. I don’t think there’s a person who crossed her path that didn’t see Sharen as a source of support, a source of knowledge or a source of comfort,” says Robert.

Sharen was also described as an exceptionally dedicated teacher, world traveller, cafe owner/operator, accomplished gardener, and extraordinary volunteer of twenty years at Sunnybrook Health Sciences Centre. Sharen’s passion for gardening is what prompted her volunteer work with Sunnybrook, through a greenhouse run by the foundation to sell flowers. When the greenhouse was no longer, she continued giving her precious time to volunteer in other ways.

Some years ago, Sharen was diagnosed with age related macular degeneration. As part of her treatment, she was getting injections into her eyes every couple of weeks. It was then, according to Robert, that she became a ‘very knowledgeable patient’ and found a renewed interest in science ― she was interested in what precisely her physicians were doing.

Just prior to the COVID pandemic, physicians found fluid on Sharen’s lungs, which sadly led to a cancer diagnosis. Still, Sharen’s perpetual optimism meant that she both faced her illness bravely and still took the time to bring joy to those who surrounded her.

“Sharen saw Weizmann as being in the forefront of science and in developing science to the benefit of helping people.”
— Robert C. Kay

Sharen’s informed approach to her cancer treatment also inspired Robert’s 10-year-old grandson, Joel, to profile her in a school project. Robert’s grandson so adored Sharen that he fondly called her his ‘grand-friend.’

“Sharen would buy coffee cards for the orderlies and nurses as a token of her appreciation. She treated everybody with great respect and they in turn loved her. I still remember the hospital staff’s touching expressions of caring and sorrow when I told them that Sharen had passed,” says Robert.

Incredibly giving throughout her lifetime, Sharen passed away on August 1, 2021.

As a final act through her Will, Sharen invested in the future of others through generous donations to Toronto Western Hospital (part of the University Health Network) and the Weizmann Institute of Science.

Sharen was introduced to Weizmann through Robert, and together they attended Weizmann events in Toronto that featured visiting scientists.

“Sharen saw Weizmann as being in the forefront of science and in developing science to the benefit of helping people. I think she was impressed in how that scientific research would ultimately benefit humankind,” says Robert.

“And that’s what Sharen was all about.” 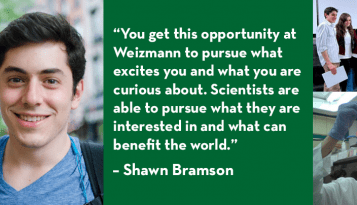