Interview with Prof. Idit Shachar, Head of the Office for the Advancement of Women in Science and Gender Equality at the Weizmann Institute of Science, on the way forward for a better representation of women scientists in academia

At the onset of the COVID-19 pandemic, when female senior scientists and research students experienced many difficulties both in their scientific work and at home, five professors at the Weizmann Institute of Science – Idit Shachar, Michal Irani, Maya Schuldiner, Karina Yaniv, and Michal Sharon – established the GET forum, which stands for Gender Equality Together. Subsequently, they reached out to scientists of all genders to participate in the Institute’s various initiatives and activities to advance women scientists. “Together with 50 scientists or so, who had joined our efforts, we set up several task forces aimed at tackling the issue at hand from different angles. We collected many data in order to understand where inequality manifests and what its causes are. The data and our conclusions were presented to the Institute’s President, management members, and the Scientific Council”, says Prof. Shachar, who was appointed Head of the Office for the Advancement of Women in Science and Gender Equality at the beginning of 2021, right at the peak of the pandemic’s difficult third wave. 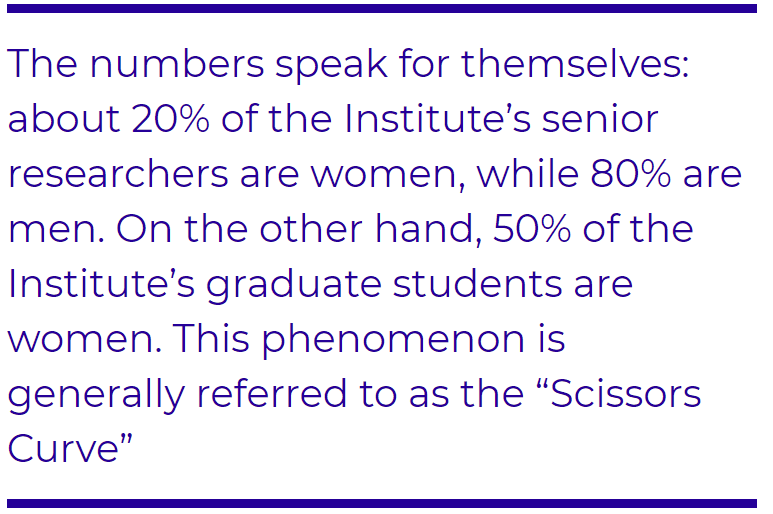 An esteemed researcher in the field of immunology, Prof. Shachar brings to the table not only her immense professional experience, but also valuable personal insights; as a leading female scientist, she has intimate knowledge of the struggles women often encounter along the academic track – as well as unique and creative ways to cope with them. “Let us all listen and help one another, and together create the environment that will facilitate the change we are hoping for; let us dare make our dreams a reality, as scientists and as women, because we can”, she says. 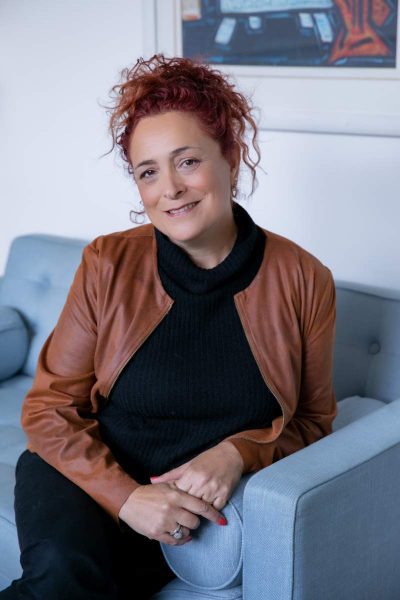 “The numbers speak for themselves: about 20% of the Institute’s senior researchers are women, while 80% are men. On the other hand, 50% of the Institute’s graduate students are women. This phenomenon is generally referred to as the “Scissors Curve”: after completing their doctoral studies many female students, compared to their male counterparts, do not continue to the next important milestone in their academic careers – the post-doctoral fellowship, which usually takes place abroad. It’s true that the Weizmann Institute of Science erected a scholarship program for female students embarking on post-doctoral training abroad, and the program so far has been immensely beneficial. But the numbers are still slow to rise and the reasons behind this are varied: many female students find it difficult to relocate because of familial considerations, or because their partners cannot leave their workplace. Moreover, many are apprehensive of the inherent difficulties, competition and dedication required of an academic career and would rather join the ranks of industry professionals here in Israel upon completion of their doctoral studies, and maintain a more sustainable work-life balance. It is important to note that there is absolutely no correlation between their scientific capabilities and achievements and this particular decision. One of our goals is to support them through these very stages, when they’re debating their professional way forward, and to help them not give up on their academic dream, should they have one. This is definitely not an easy task, but not an impossible one either”. 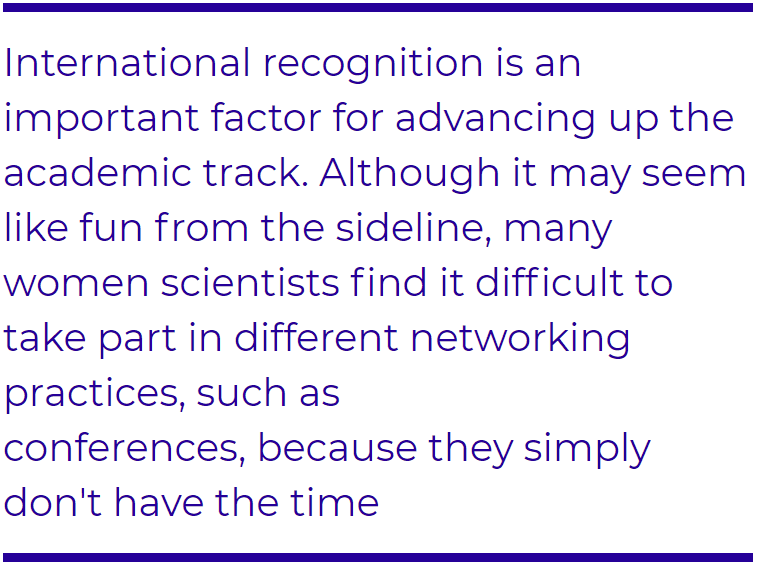 “We also found out that many of those who do happen to complete their post-doctoral training abroad hesitate to apply to a position at the Institute, since it is known for its competitive environment and strict requirements from tenure track researchers. Many of those who ultimately apply for a position, don’t get called for an interview, and in this regard there are many studies, which indicate that if a man or woman were to submit the same CV, the men will often be better received. I don’t think that this particular form of discrimination is done on purpose or out of malicious intent – it is rather an incognizant bias. At admission committees, for example, when a female name candidate is brought up she is often discussed in terms of the difficulties she will encounter during her scientific career due to her status as mother. There are also data, which demonstrate that grant requests submitted by women are approached differently than those submitted by men. Also in terms of prizes and awards we found that most recipients are men; female students are less considered for such distinctions, even though their academic accomplishments are just as deserving. It should be mentioned that recently, the Feinberg Graduate School at the Institute initiated a campaign to encourage senior researchers to equally recommend female students for awards. 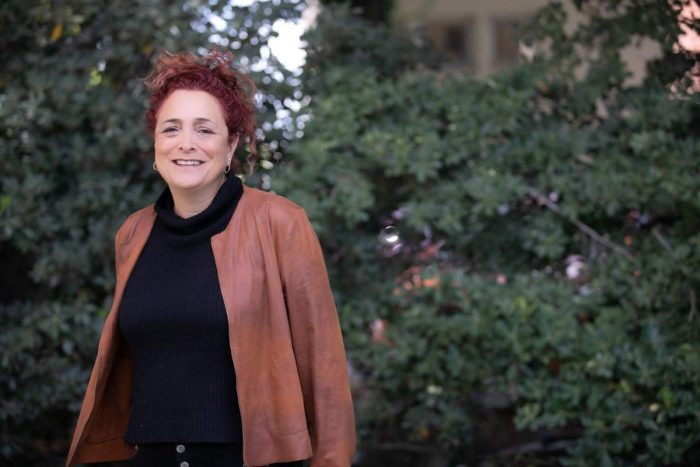 “An additional important hurdle that should be discussed, and which we as senior researchers at the Institute have all experienced, is the matter of promotion committees. One of the most important criteria for advancing up the tenure track is international recognition – how often you are invited to international conferences and how many colleagues are members of your international research community. In reality, many of us (women) arrive at a conference immediately after it had already started and head back even before it is officially over. We don’t have time to catch a beer with colleagues and to discuss pressing football news with them. Networking doesn’t necessarily take up the same space it does with our male colleagues and so we don’t succeed in fulfilling this particular criterion. One solution to this issue was to mandate organizers of academic conferences to include a 50% female representation at their events. This is somewhat forced in my opinion, it doesn’t always work and is still far from making an actual difference. I consider this evaluation criterion to be rather marginal, despite its assumed prestige and importance. It is often tainted with politics and a play of power and interests; however, I do understand that it’s part of the game. Today, with Zoom, maybe this particular difficulty will diminish, and we won’t have to travel as much to gain international recognition. It might look like great fun from the sideline, but for us mothers, it is a tough row to hoe”. 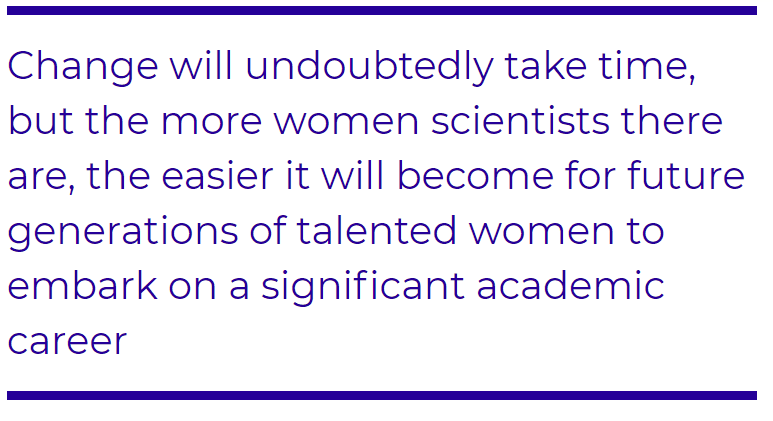 “Additionally, we would like that in every committee at the Institute there will be a member whose role it is to make sure that there is no bias whatsoever, not over gender, religion or race; someone who will assure that only objective considerations, such as scientific impact and excellence, are taken into consideration. Although we all have experienced these difficulties and frustrations, and also overcame them eventually – it is important for us to help the younger generation of women scientists and to nurture them into a more accepting and encouraging environment”.

It so happens that Prof. Idit Shachar’s group is composed solely of women. She mentions humorously that she used to have one male student in the past. “Male students just don’t reach out to me”, she says. “The atmosphere in the lab is great, we have a lot of love and appreciation for one another, we’re there to help out whenever we can. For example, when someone has an important experiment we are all onboard, so that she won’t have to stay overnight or strain herself too much. To me, this is almost as important as the actual research”. Prof. Shachar completed both her undergraduate and graduate studies in biochemistry at Tel Aviv University, and performed her post-doctoral training at Yale University in the United States. Upon completing her fellowship, she joined the Institute as a Principal Investigator. “I’ve been at the Weizmann Institute for more than 25 years now, and never thought that there was anything wrong with how women advance in scientific careers… until I reached my final promotion, that of Full Professor. At that point I came across several difficulties in the committees; difficulties that my fellow female colleagues have experienced as well. That’s when I decided to try and change the system from within and for the better. These are processes which take time, but the more women scientists there are here at the Institute, the easier it will become for future generations of talented women to embark on a significant academic career”.