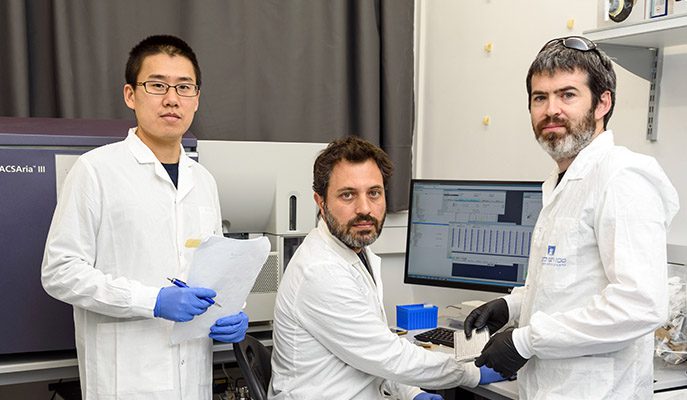 Why do some cancer patients respond well to immunotherapy, while others do not? Certain immune cells are known to attack cancer cells and destroy them, while other, nearly identical immune cells, appear to tolerate the presence of cancer. Understanding the differences between these cells could help advance research into improving the efficiency of immunotherapy. Prof. Ido Amit, and Drs. Ido Yofe and Hanjie Li in his team in the Weizmann Institute of Science’s Immunology Department, working with Prof. Amos Tanay and Dr. Yaniv Lubling of his group in the Institute’s Computer Science and Applied Mathematics Department, are trying to do just that. The teams recently found a clue that could point research in new directions and help in the development of new, more targeted treatments.

The Institute scientists worked together with research student Anne van der Leun in the group of Prof. Ton Schumacher and physicians in the Netherlands Cancer Institute. Using a novel technique developed in Amit’s group to sequence the RNA and T-cell receptors of individual cells, they investigated immune cells taken from within and around tumors. This method is a sort of “genetic microscope” that enabled them to approach each cell individually and create an “activity profile” for each cell. Among other things, this approach enabled them to map the “familial” relationships between cells, as well as the similarities and differences in the ways they function in the tumor. What makes this approach so powerful is its ability to identify specific cell profiles that are crucial to the immune response in the fight against cancer.

“A large segment of the T cells experience what has been described as fatigue, allowing the cancer to escape their watch”
—

The cells in question, T cells, are the infantry troops of the immune system, and they identify and fight cancer on the front lines. “They normally defend our body. In many tumors, however, a large segment of the T cells experience what has been described as fatigue, allowing the cancer to escape their watch. These weary cells are the ones that are considered the natural candidates for immunotherapy,” explains Li. But after scanning tens of thousands of immune cells from tumor samples and applying a unique “big data” analysis they had developed, the Institute scientists concluded that the fatigued cells are, in fact, not all that worn out. “We found these cells actually undergo rapid proliferation and clonal expansion. In fact, we see that these cells are not all the same; they come in different “flavors.” The current view that these “battle-weary” cells were originally fearsome fighters is not necessarily correct,” says Lubling. Yofe, adds: “This finding may change our thinking on whether and how we can awaken these cells, which cells should be targeted in treatments, or how we might prevent them from becoming fatigued. Such insight could direct us in the development of new drugs and means of treatment.”

Which of these exhausted T cells serve as a resource and which might, in fact, be hindering responses to the new immunotherapies? Can we adopt a personalized medicine approach, based on a patient’s immune cell profiles? These questions are now at the focus of the group’s research; their ultimate goal is to create the basis of new targets and approaches that can lead to effective treatment for each and every patient.

The Promise and Challenges of Immunotherapy

This year’s Nobel Prize in Physiology or Medicine was awarded to Professors James Allison and Tasuku Honjo for their research, which provided the foundation of immunotherapy – a new approach that revolutionized the way cancer patients are being treated. Their findings showed that the immune cells that should be fighting the cancer become “exhausted” by the continuous battle and are thus ineffective in killing the tumor cells. Several drugs that were developed on the basis of these findings “release the brakes” that prevent these immune cells from clearing away the tumor cells. This approach has already saved many lives in the past decade. But these new immunotherapies do not work in many cancer types, and even for the types where they do, the response is seen in only a minority of patients. Doctors and researchers remain puzzled by this variability in success; the next frontier in immunotherapy is to understand why some patients respond and others do not.

Prof. Ido Amit’s research is supported by the David and Fela Shapell Family Foundation INCPM Fund for Preclinical Studies; the Kekst Family Institute for Medical Genetics; the Thompson Family Foundation Alzheimer’s Research Fund; the Adelis Foundation; the Eden and Steven Romick Post-Doctoral Fellowship Fund; the Steven B. Rubenstein Research Fund for Leukemia and Other Blood Disorders; the Alan and Laraine Fischer Foundation; Drs. Herbert and Esther Hecht; the Rising Tide Foundation; the BLG Trust; the Anita James Rosen Foundation; the Felix and Silvia Schnur Endowment Fund in Stem Cell Research; Isa Lior; The Wolfson Family Charitable Trust; Carla Hunter and Andre M. Schub; the estate of Ruth Drobnes; the estate of Simon Saretzky; the estate of Lydia Hershkovich; the estate of Alice Schwarz-Gardos; and the European Research Council. Prof. Amit is the recipient of the Helen and Martin Kimmel Award for Innovative Investigation.

Prof. Amos Tanay’s research is supported by the Ilana and Pascal Mantoux Institute for Bioinformatics, which he heads; the Helen and Martin Kimmel Award for Innovative Investigation; the Edmond de Rothschild Foundations; Prof. Amnon Shashua; the Steven B. Rubenstein Research Fund for Leukemia and Other Blood Disorders; David and Molly Bloom; the William P and Gertrude Schweitzer Foundation; the Ruth and Samuel Rosenwasser Charitable Fund; the Wolfson Family Charitable Trust; Barry and Janet Lang; the estate of Lydia Hershkovich; the estate of Alice Schwarz-Gardos; and the European Research Council.