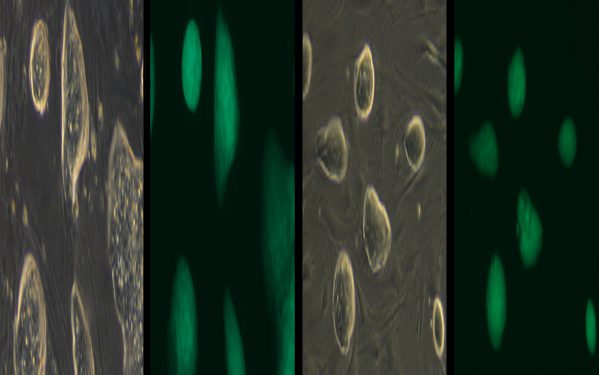 What has been holding back the use of “reprogrammed” stem cells in research and medicine? As reported in two new papers published in Cell Stem Cell, researchers at the Weizmann Institute of Science have identified and removed a “handbrake” that hinders this process. The research team produced reprogrammed cells in unprecedented quantities and in record time, as well as opening up what has been, until now, something of a black box on the process that these cells undergo.

Scientists discovered, over a dozen years ago, how to insert four genes into adult cells and get them to revert to embryonic stem-like cells that can then differentiate into any cell type — so-called induced pluripotent stem cells, or iPSCs. Such cells promised to help cure disease and grow transplant organs; but their use has been held up by a number of issues, including the fact that little is known about the way the reprogramming process works. This is due in part to the small yields – around 10% in mouse cells and a fraction of that in humans – and the slowness of the reprogramming – around a month from start to finish.

Some five years ago, Prof. Jacob Hanna and his team in the Institute’s Molecular Genetics Department discovered a molecule he calls a “handbrake.” This molecule, known as Mbd3, normally protects our cells from going backwards in development. When this molecule was removed with genetic engineering techniques, most of the cells in cultures in his lab were able to become iPSCs. But Mbd3 works as part of a protein complex that has several roles to play in the cell; the research team found that cells did not survive without the complex and the process of creating cells with “just enough” of it was cumbersome.

“Other labs are already beginning to adopt our method, making their own changes to it and asking new questions”
—

Since that discovery, Hanna’s team has continued to investigate the Mbd3 protein complex. They discovered that this complex comes in quite a few different versions: Around 12 different components assemble to make it, and each of these has several different forms. The researchers identified the central protein molecule in this complex; and they found that for it to act as a handbrake, both this central element (known as Gatad2a) and the Mbd3 molecule had to be present in specific forms.

“That finding enabled us to ‘surgically’ remove just this particular version of the complex,” says Hanna. After taking out the specific complex in the mouse cells, the team managed to grow cultures in which 100% of the cells reverted from a type of skin cell to iPSCs – within only eight days. Additional testing showed that the cells produced by this method were indistinguishable from iPSCs grown by other methods.

“When we first showed that we could convert 100% of adult mouse cells to iPSCs, many found our results to be incredible,” says Hanna. “But we have now shown, without a doubt, that it works. Other labs are already beginning to adopt our method, making their own changes to it and asking new questions.”

Probing the black box of reprogramming

With the new method, Hanna and his team were ready to begin to probe the “black box” of cell reprogramming. They enlisted the assistance of Dr. Shlomit Gilad and her team in the Stephen and Nancy Grand Israel National Center for Personalized Medicine. The researchers grew their iPSC cultures and performed deep RNA sequencing on a portion of the cells every 24 hours. This enabled them to see which genes were being turned on in the cells, when and in what amounts. Working with Weizmann Institute scientists Drs. Yifat Merbl, Yonatan Stelzer, Igor Ulitsky, and Profs. Amos Tanay, Ido Amit and Yitzhak Pilpel, Hanna and his team investigated these results from numerous angles, in single cells and in comparison with cells grown with older methods.

All together, they produced something like 12 billion sequenced reads – a goldmine of data for further investigations. In their initial analysis, says Hanna, they have already uncovered two surprising findings. The first concerns one of the four genes that is inserted, called c-Myc. This gene had been a cause for concern for the medical use of iPSCs because it is, among other things, an oncogene (that is, a cancer-promoting gene). In fact, some recent research has been investigating the possibility of eliminating this gene from the protocol and creating the stem cells with just three genes. Hanna and his team grew iPSCs without c-Myc, and found that the cells compensated by activating this gene on their own. “In other words, c-Myc is absolutely critical for the reprogramming to take place. So safety concerns might still need to be addressed, even if only the three genes are introduced.”

In the other major finding, the group succeeded in revealing the details of the very first step of the reprogramming process, which takes place long before the cells show any signs of the impending change to their identities. The proteins produced by the genes (transcription factors) bind to parts of the genome called enhancers – short regions that boost gene transcription. “The transcription factors go straight to the ‘on switches,’ preparing to initiate the process. The cell is in no way a stem cell yet, but from the second these proteins bind to the enhancers, the cells are committed to the change,” says Hanna. “This is a finding that could not have been observed with any previous method,” he adds.

Hanna and his group are continuing their research with the new method, asking, for example, whether there is second handbrake that keeps the yield relatively low in human cell cultures, how iPSCs compare to embryonic stem cells and what happens as they start to differentiate into cell types.

“The new findings suggest that we still need to proceed with caution in producing iPSCs for medical use, and they also point toward many open questions,” says Hanna. “But we have shown that the research can now proceed more rapidly without that handbrake to slow it down.”