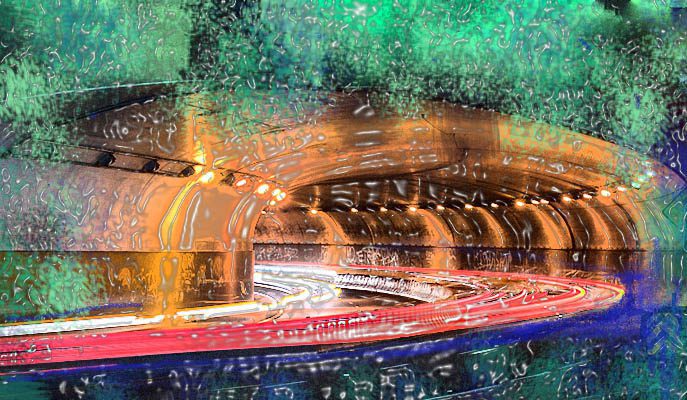 The quantum phenomenon known as tunneling is generally associated with highly controlled physics experiments, nuclear fusion in stars or futuristic setups for quantum computing. But the same phenomenon may also be taking place in proteins present in our bodies. New research at the Weizmann Institute of Science has demonstrated this activity in proteins and suggests that proteins may put tunneling to unexpected use in their day-to-day functioning. The surprising findings, which were recently reported in the Proceedings of the National Academy of Science, PNAS, (USA), may have significance for biomedical research into the all-important functions in our bodies that rely on electron transfer, as well as for the field of bioelectronics.

Tunneling is a quantum process, which in a solid material is generally observed in the lab under very controlled conditions, preferably at low temperatures and usually on a very small scale – much smaller than a protein. In classical physics – the realm of physics that governs phenomena in our everyday world – particles like electrons are prevented from leaving their atoms or molecules by energy barriers. In quantum physics, in contrast, there is a chance that particles, especially very small ones such as electrons, may pass – or tunnel – through such a barrier. Proteins are thought to be not only too large for such quantum phenomenon as tunneling to be observed, but, compared to the materials in which tunneling is normally studied, they are flexible, noisy and continually interacting with their environment. None of these are conducive to quantum effects.

Prof. David Cahen of the Institute’s Materials and Interfaces Department says that the new study arose out of some strange results a number of years ago in research conducted with Prof. Mordechai Sheves of the Organic Chemistry Department and Prof. Israel Pecht of the Immunology Department, which hinted at tunneling. In their work, they investigated the ability of proteins to conduct electrons – research that may lead to the use of proteins in electronics components. Indeed, the group found that proteins are, relatively speaking, excellent conductors of electricity – much better than one would expect for “non-electrical” biological molecules. The researchers had observed electron transport through proteins under very diverse conditions, including different distances between the electrodes, as well as temperature differences. But changing these parameters did not affect the current passing through the protein. “This was very weird,” says Cahen. “High-school physics teaches us that current drops with distance and it must somehow change with heating – either increasing in a semiconductor or decreasing in a metal. There is only one known mechanism that can explain this lack of response, and that is quantum tunneling.” Indeed, tunneling inside proteins had been observed, but the researchers were after tunneling that would cross an entire protein and through a contact often used in electronics knwon as a solid-state juction.

For the present study, Dr. Jerry Fereiro, an Azrieli postdoctoral researcher in the Cahen-Sheves-Pecht group, and Dr. Xi Yu designed and used an experimental setup to search for quantum phenomena in a biological molecule. This is no simple task, as their quest needed to combine biology, electronics, chemistry and physics in a unique way.

The first hurdle they faced was in dealing with “jiggly,” fragile protein molecules. However, the proteins’ ability to conduct electrons at any temperature worked in their favor: They realized they could run their experiment under very cold conditions – flash freezing the proteins to about 15 degrees above absolute zero, which would eliminate most of the jiggle. The cold proteins were sandwiched – very gently – between two thin plates of metal and a low voltage applied to one side. One end of each protein was firmly attached (covalently) to one metal plate, but the other end was unattached and free to move a tiny bit. Electrons were thus transported through the protein, and they could then cross to the other metal plate, enabling the researchers to test whether any behavior consistent with tunneling was indeed occurring.

“At this point we have no choice but to accept the evidence that electrons do tunnel through proteins.”

Recorded patterns of vibrations within the conducting protein molecules revealed a signature that is unique to tunneling, indicating the quantum phenomenon had taken place. “The setup allowed us to experiment with the barriers and electron energy levels,” says Cahen, “so that we could see different signature patterns depending on which electrons were allowed to tunnel.”

The new findings do not fit with accepted models either of physics or of protein behavior. “Something like a protein should be bad at controllable quantization,” says Cahen. But he and the research group, which included a theorist, Prof. Juan Carlos Cuevas of the Universidad Autónoma de Madrid, believe that at least some proteins may make use of tunneling, and they have proposed a reason why: It may be a way of dealing with extra electrons that could harm the protein. Many proteins have special groups that are chemically active, and these may function as way stations that can be reached via tunneling, to “park” the electron until they can transfer this dangerous but very important guest. And since tunneling appears to be a useful way of getting electrons into or out of proteins, it might be crucial for the few cellular functions that directly rely on electron transport, among them respiration and photosynthesis.

“The experiment took several years, and Jerry had to repeat the trials over and over to make sure that what we were seeing was indeed a tell-tale sign of tunneling,” says Cahen. “At this point we have no choice but to accept the evidence that electrons do tunnel through proteins. Our findings suggest that they do it at room temperature, in real life. This raises many more questions than it answers. In the future, it could lead to new insights into the workings of our bodies as well as pointing in new directions for creating interfaces between electronics and biological systems.”

Prof. Mordechai Sheves’ research is supported by the Helen & Milton A. Kimmelman Center for Biomolecular Structure & Assembly; the Helen and Martin Kimmel Center for Molecular Design; and the Estate of George Hecht. Prof. Sheves is the incumbent of the Ephraim Katzir-Rao Makineni Professorial Chair in Chemistry, and the head of the Center for Translational Research.