Until recently, before NASA’s Juno space probe entered its orbit around the planet Jupiter, no one knew that powerful cyclones, approximately the size of Australia, rage across its polar regions. Jupiter’s storms, as opposed to their earthly variety, do not disperse, hardly change, and are clearly not associated with flying rooftops and damp weather reporters. In an article published today in Nature Geoscience, researchers from the Weizmann Institute of Science reveal the mysteries of Jupiter’s cyclones: which forces are at work fixing these gargantuan storms to their polar locations, and why their numbers and locations remain more or less constant over time.

“We can think of Jupiter as an ideal climate laboratory,” says Prof. Yohai Kaspi of Weizmann’s Earth and Planetary Sciences Department. Earth is an intricate and multivariable system: it has oceans and an atmosphere, continents, biology – and of course, human activity. Jupiter, on the other hand, the largest planet in our solar system, is composed of gas and is therefore a far easier system to study, one that we can create predictions for and test hypotheses on. The data required for these predictions and hypotheses is collected by Juno – a research probe that was launched by NASA in 2011 and entered Jupiter’s orbit mid-2016. Kaspi, a NASA co-investigator on the Juno mission, witnessed one of its more exciting findings: the cyclone storms swirling around the planet’s poles. 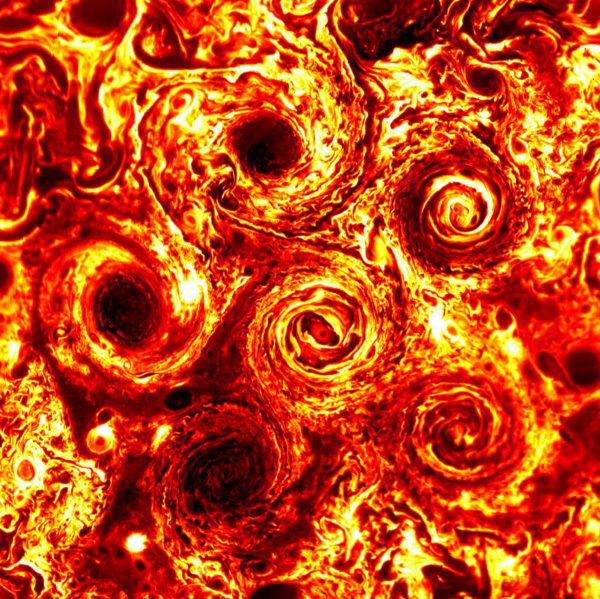 “If we look at older images of Jupiter taken before 2016,” says Kaspi, “we see that the poles were commonly represented as large grey areas because no one knew then what they actually look like.” The reason for that lies in the fact that the solar system is organized on the same plane, which is very close to the plane of Jupiter’s equator. Therefore, past observations of the planet that were carried out from Earth, or from earlier space missions, could for the most part only capture Jupiter’s lower latitudes. Hence, one of the Juno mission’s noteworthy innovations is its polar orbit, which allowed researchers to observe in detail Jupiter’s tumultuous poles for the first time. This is exactly how the cyclones were exposed, surprisingly organized and resembling a round tray of cinnamon rolls, along latitude 84°N and S. Moreover, data gathered from Juno’s many orbits around Jupiter indicate that the number of cyclones remains fixed – eight are active around the north pole and five around the south. “This discovery was very surprising at the time,” says Kaspi, “because we expected the poles to be more or less symmetric.” In a previous study, Kaspi used the lack of symmetry in Jupiter’s gravitational field to determine the depth of the strong east-west wind belts that are characteristic of the planet’s atmosphere.

On Earth, tropical cyclonic storms form in areas where the water temperature exceeds 26 degrees Celsius – usually in the center of the Atlantic and Pacific Oceans – and they drift in a circular motion toward the poles, owing to a pull resulting from the planet’s spin. On Jupiter, on the other hand, strong jet streams prevent these storms from forming below latitude 60º – only above it are the currents weak enough to allow cyclones to rage on. What causes these particular storms on Jupiter to settle at latitude 84º? According to the new study, Jupiter’s cyclones are indeed attracted to the poles, but the polar storm located in the center of the ring of cyclones pushes them away, preventing them from reaching the pole itself.

“As long at the cyclones remain at a distance from the pole – they are attracted to it. But the nearer they venture – the more strongly they are repelled,” says doctoral student Nimrod Gavriel from Kaspi’s research group, whose thesis focuses on elucidating this phenomenon. “The question is whether the repulsion effect is strong enough to resist the pole’s attraction. Latitude 84º is where these forces even up.” Gavriel and Kaspi propose a mathematical model that considers the diameter of the polar cyclone (which is larger at the south pole than in the north), the possible minimal distance between each cyclone, the surface area around latitude 84º and the size of the cyclones and their spin, and that accurately predicts the presence of eight cyclones across the north pole. As for the south pole, based on their calculations, the number of cyclones should be 5.62. This number is consistent with the data collected by Juno: in reality this number cannot exist, but the five southern storms often separate into six storms, as observed during the probe’s eighteenth and thirty-fourth orbits around Jupiter. The proposed model also explains why this phenomenon is absent on Jupiter’s closest neighboring planet – Saturn.

“We are trying to understand atmospheric dynamics at a large scale, and providing a successful explanation for the phenomenon of Jupiter’s polar cyclones gives us the confidence that we truly know what’s going on there,” says Kaspi. This confidence may be paramount for us here on Earth, since a deeper understanding of cyclones could aid meteorologists to predict, for example, how the heating up of our planet will affect the movement of storms across it – a challenge that humanity will most likely face in the near future. But Kaspi’s fascination with the exploration of Jupiter is more straightforward: “There are no new islands to discover in the Pacific, and most planetary bodies in the solar system have already been mapped. The poles of Jupiter and the other gaseous planets are, perhaps, the last spots in the solar system that are still left to explore.” 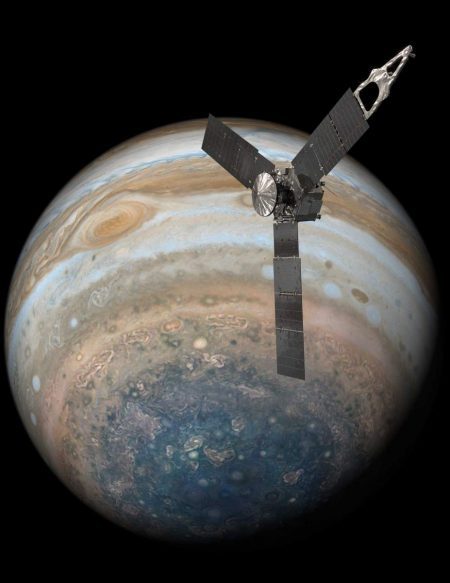 “We are expecting more valuable data to come in from Juno during the next couple of years,” Kaspi adds, following the recent extension of the Juno Mission to 2025. “Owing to gradual changes in the spacecraft’s polar orbit, it is now getting closer and closer to Jupiter’s north pole, allowing us to gain information about this polar region from several specialized instruments,” he concludes.

Prof. Yohai Kaspi is the Head of the Helen Kimmel Center for Planetary Science.