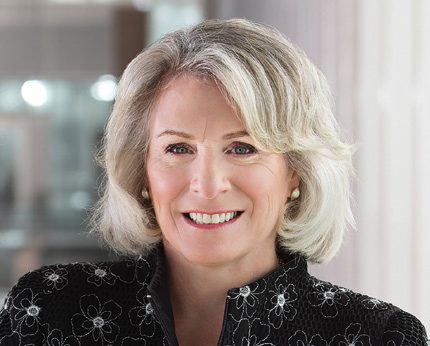 Dr. Elizabeth Cannon is Professor of Geomatics Engineering and President Emerita of the University of Calgary. From 2010 to 2018, she served as the university’s eighth president and vice-chancellor, the first alumna to hold that position. Prior to her appointment as president, Cannon was the dean of the Schulich School of Engineering at the University of Calgary from 2006 to 2010.

Born in Charlottetown, Prince Edward Island, Cannon developed an early interest in the fields of science, technology, engineering and mathematics (STEM). She completed a Bachelor of Applied Science in Mathematics at Acadia University in 1982, before moving to Calgary, Alberta to complete a BSc, MSc and PhD in Geomatics Engineering at the University of Calgary.

Cannon has led research at the forefront of Global Positioning Systems (GPS) since 1984, commercializing technology to over 200 agencies worldwide. She has served on the National Advisory Board on Earth Sciences to the Canadian Minister of Natural Resources, as past president of the U.S. Institute of Navigation, and as a past director of the Canada Foundation for Innovation.

From 1997 to 2002, Cannon held the NSERC/Petro- Canada Chair for Women in Science and Engineering for the Prairie Region. In this capacity, Cannon worked to raise public awareness about science and engineering careers for women, as well as conduct research on the factors that influence the decision to pursue a career in engineering. Cannon also developed programs to encourage women to explore careers in STEM fields, including the largest online mentorship program of its kind in Canada, Cybermentor.

In recognition of her impact on geomatics engineering, Cannon received the Johannes Kepler Award from the U.S. Institute of Navigation in 2001, APEGA’s Centennial Leadership Award in 2012, the Gold Medal Award from Engineers Canada in 2013, and the NSERC E.W.R. Steacie Fellowship from 2002 to 2004.

In 1998, Cannon was selected as one of Canada’s Top 40 Under 40®, and in 2006, she was named as one of Canada’s Top 100 Most Powerful Women by the Women’s Executive Network. She has also been recognized with the Wired Woman Pioneer Award from the Wired Woman Society in 2002 and the Betty Vetter Award for Research from the Women in Engineering Programs and Advocates Network in 2001.

Cannon has received Honorary Doctorates from the University of Ottawa, Acadia University and the Université de Montréal, as well as an Honorary Bachelor of Business Administration from the Southern Alberta Institute of Technology.