In the not-so-distant past, the discovery of a supernova – an exploding star – was considered a rare occasion. When Prof. Avishay Gal-Yam of the Weizmann Institute’s Particle Physics and Astrophysics Department was a doctoral student, for example, he located seven of them over the course of four years. Today, advanced measuring instruments and analysis methods make it possible to detect fifty such explosions on a daily basis. On the one hand, the improved means used by present-day astrophysicists to spot supernovae may have made these celestial events less of an attraction over the years. On the other hand, the greater number of observations of them has also increased the probability that researchers would be able to spot rarer types of explosions that have so far existed only as theoretical constructs. Gal-Yam and colleagues recently discovered a rare-type supernova that has never been observed before. Their findings are being published today in Nature. 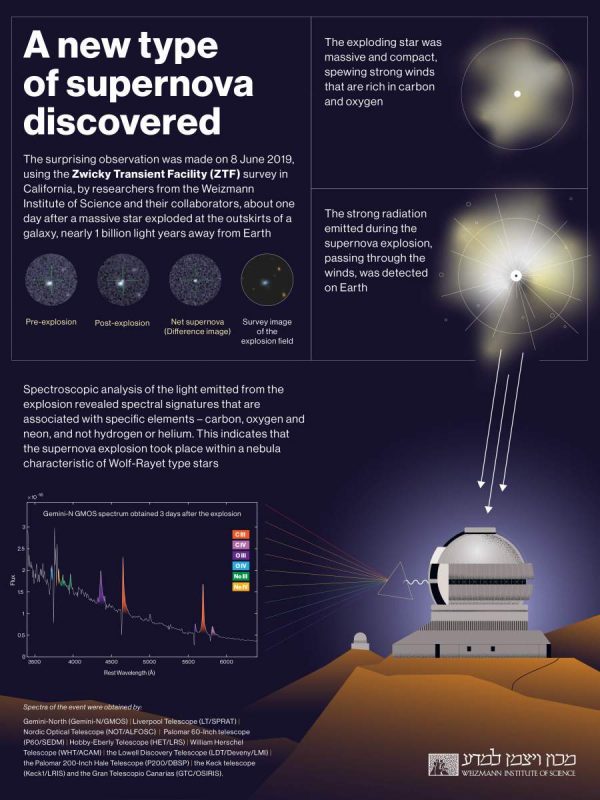 The core of every star is fueled by nuclear fusion, wherein the nuclei of lighter elements fuse together to form heavier elements. The fusion of four hydrogen nuclei results in the formation of a helium atom, while several helium nuclei combined result in the formation of carbon, oxygen, and so on. The last element that will naturally form through nuclear fusion is iron, which is the most stable atomic nucleus. In normal circumstances, the energy produced at the star’s core maintains extremely high temperatures that cause its gaseous matter to expand, thus preserving the fine balance with the force of gravity, drawing the star’s mass toward its center. Once the star runs out of elements to fuse and stops producing energy, this balance is disrupted, leading either to a gaping black hole that tears open at the heart of the star, causing it to collapse in on itself, or to the star’s explosion, which releases the heavy elements, fused during its evolution, into the universe. 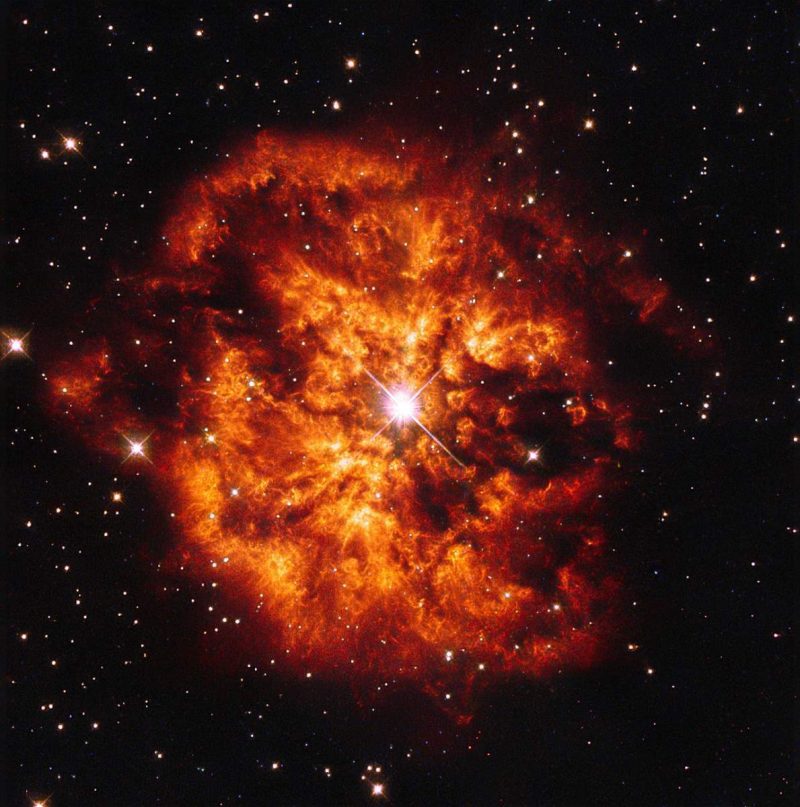 The entire process is naturally very lengthy. The life spans of massive stars – the kind that Gal-Yam, dean of the Weizmann Institute of Science’s Physics Faculty, studies ­– are considered relatively short, a few million years at most. The Sun, in comparison, has a life expectancy of about 10 billion years. The subsequent processes of nuclear fusion at the core of massive stars lead to their stratification, in which the heavy elements are concentrated at the core, and gradually lighter elements compose the outer layers. Wolf-Rayet stars are particularly massive stars that are missing one or more of the external layers that are made up of lighter elements. In this way, instead of hydrogen – the lightest element – the star’s surface is characterized by the presence of helium, or even carbon and heavier elements. One possible explanation for this phenomenon is that strong winds blowing due to high pressure at the star’s envelope, disperse its outermost layer, thus causing the star to lose one layer after the other over several hundred thousand years. When these stars are observed without the presence of the lighter elements in their envelope, it is akin to a still photograph capturing a moment in time during a long-winded process. Nonetheless, despite their relatively short life spans and their state of progressive disintegration, the supernova explosion of a Wolf-Rayet star has yet to have been definitely observed.

Analysis of the ever-growing number of supernova discoveries has led to the hypothesis that Wolf-Rayet stars simply don’t explode – they just quietly collapse into black holes – otherwise, we would have been able to observe one by now. This hypothesis, however, has just been shattered owing to the discovery, made by the Weizmann group and their international team of collaborators, of a supernova originating from this type of star. Spectroscopic analysis of the light emitted from the explosion – the electromagnetic wavelengths of light emitted from the blast – led to the discovery of spectral signatures that are associated with specific elements. In this way, the researchers were able to show that the explosion contained carbon, oxygen and neon atoms, the latter an element that has not yet been observed in this manner in any supernova to date. Moreover, the researchers identified that the matter spouting cosmic radiation did not in itself participate in the blast but rather originated from the space surrounding the volatile star. This, in turn, strengthened their hypothesis in favor of strong winds that took part in stripping the star of its outer envelope. 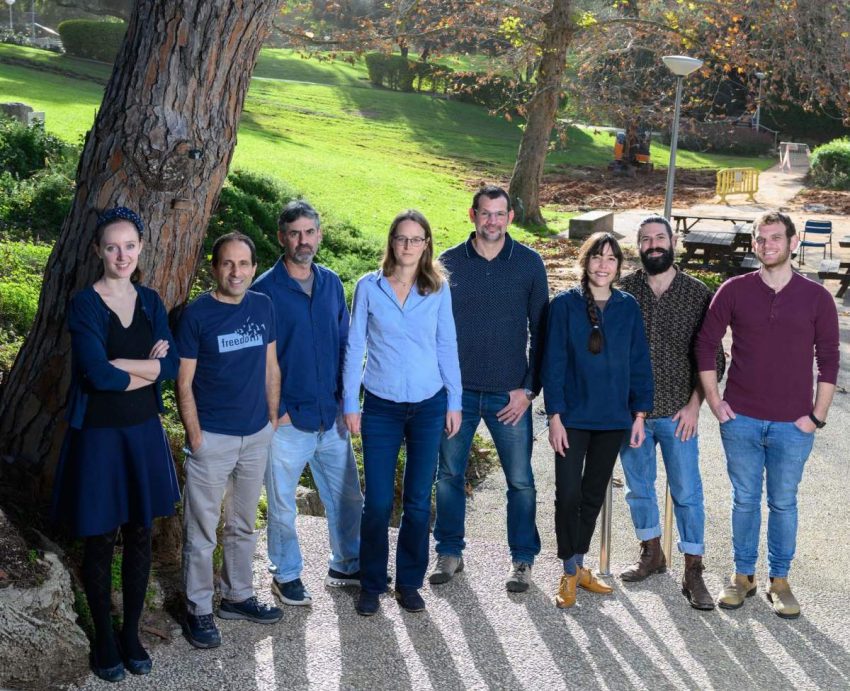 Since this observation is the first of its kind, Gal-Yam states that it may be too early to unequivocally determine the fate of all such stars. “We can’t say at this stage whether all Wolf-Rayet stars end their lives with a bang or not. It might be that some of them do collapse quietly into a black hole,” he says. “We estimate that the mass that dispersed during the explosion is probably equal to that of the Sun or a slightly smaller star; the star that exploded was significantly heavier – having a mass at least ten times greater than that of the Sun. So where did the majority of mass end up?” Gal-Yam suggests a midway scenario, in which both possible fates are fulfilled at the same time: once nuclear fusion is exhausted at the star’s core, an explosion takes place that blasts some of the mass into space, while the remaining mass collapses in on itself, forming a black hole. “One thing’s certain,” says Gal-Yam, “This is not the ‘silent’ collapse often referred to in the past. It is worth mentioning that since this discovery was first made, another similar explosion of a Wolf-Rayet star has been observed, implying that this phenomenon is indeed not a single occurrence. It is possible that the better our detection and measurement instruments become, the more this type of explosion – today considered rare and exotic – will become a common sight.”

Massive stars have a stratified structure, like that of an onion. Heavy elements, formed in nuclear fusion reactions in the star’s core, are found at its center, and increasingly lighter elements constitute the progressively outer layers (left panel). Wolf-Rayet stars are particularly massive stars that are missing one or more of the external layers of light elements: instead of hydrogen – the lightest element – the star’s surface will contain helium, carbon or an even heavier elements. One possible explanation for this phenomenon is that strong winds blowing due to high pressure close to the star’s surface, disperse its outermost layer, thus causing the star to lose one layer after the other over several hundred thousand years. Infographics: Itai Raveh

Supernovae may seem like colossal events happening far, far away that they have no direct impact on our lives. But, truth be told, they are at the heart of life itself. These cosmic explosions launch the elements that were forged at the star’s core to the far reaches of the galaxy, where they serve as the bedrock for the birth of new stars. Planet Earth and all its various and diverse lifeforms (including us Homo sapiens) are the result of such an occurrence. “We study the origins of all matter, including that found on Earth, and search for explanations of many of the physical phenomena we tend to take for granted,” concludes Gal-Yam. “This is what I am personally interested in – where did all of this come from – and I want to be able to answer this question as best and as accurately as I can.”

Prof. Avishay Gal-Yam is the incumbent of the Arlyn Imberman Professorial Chair.