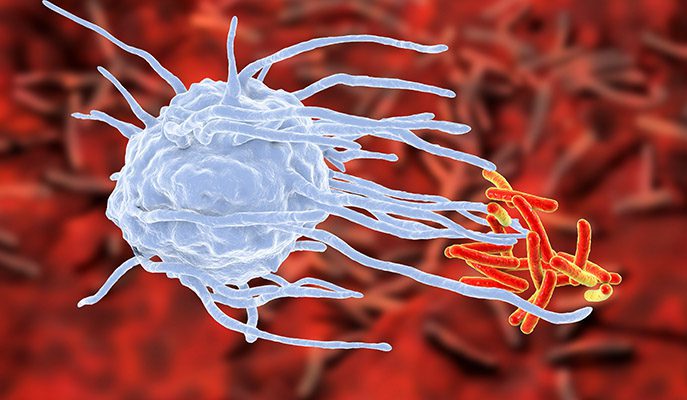 When immune cells (macrophage, blue) meet bacteria (red), the first day or two is critical for the eventual outcome

First impressions are important – they can set the stage for the entire course of a relationship. The same is true for the impressions the cells of our immune system form when they first meet a new bacterium. Using this insight, Weizmann Institute of Science researchers have developed an algorithm that may predict the onset of such diseases as tuberculosis. The findings of this research were recently published in Nature Communications.

Dr. Roi Avraham, whose group in the Institute’s Biological Regulation Department conducted the research, explains: “When immune cell and bacterium meet, there can be several outcomes. The immune system can kill the bacteria; the bacteria can overcome the immune defenses; or, in the case of diseases like tuberculosis, the bacterium can lie dormant for years, sometimes causing disease at a later stage and sometimes remaining in hibernation for good. We think that the junction in which one of those paths is chosen takes place early on – some 24-48 hours after infection.”

The scientists first tested real meetings between immune cells and bacteria – this time between blood samples (which contain immune cells) and the Salmonella bacterium. Led by Drs. Noa Bossel Ben Moshe and Shelly Hen-Avivi in Avraham’s group, the research team used a method that has been developed in recent years, at the Weizmann Institute among other places, to sequence the gene activity in thousands of individual cells. In other words, they could see what each cell looked like as it responded to the Salmonella bacteria and they could map out the activation profiles of each. This, indeed revealed patterns not seen in standard lab tests, and it seemed to confirm their hypothesis – there were indeed, differences that enabled them to trace responses from the initial meetings to the later outcomes. 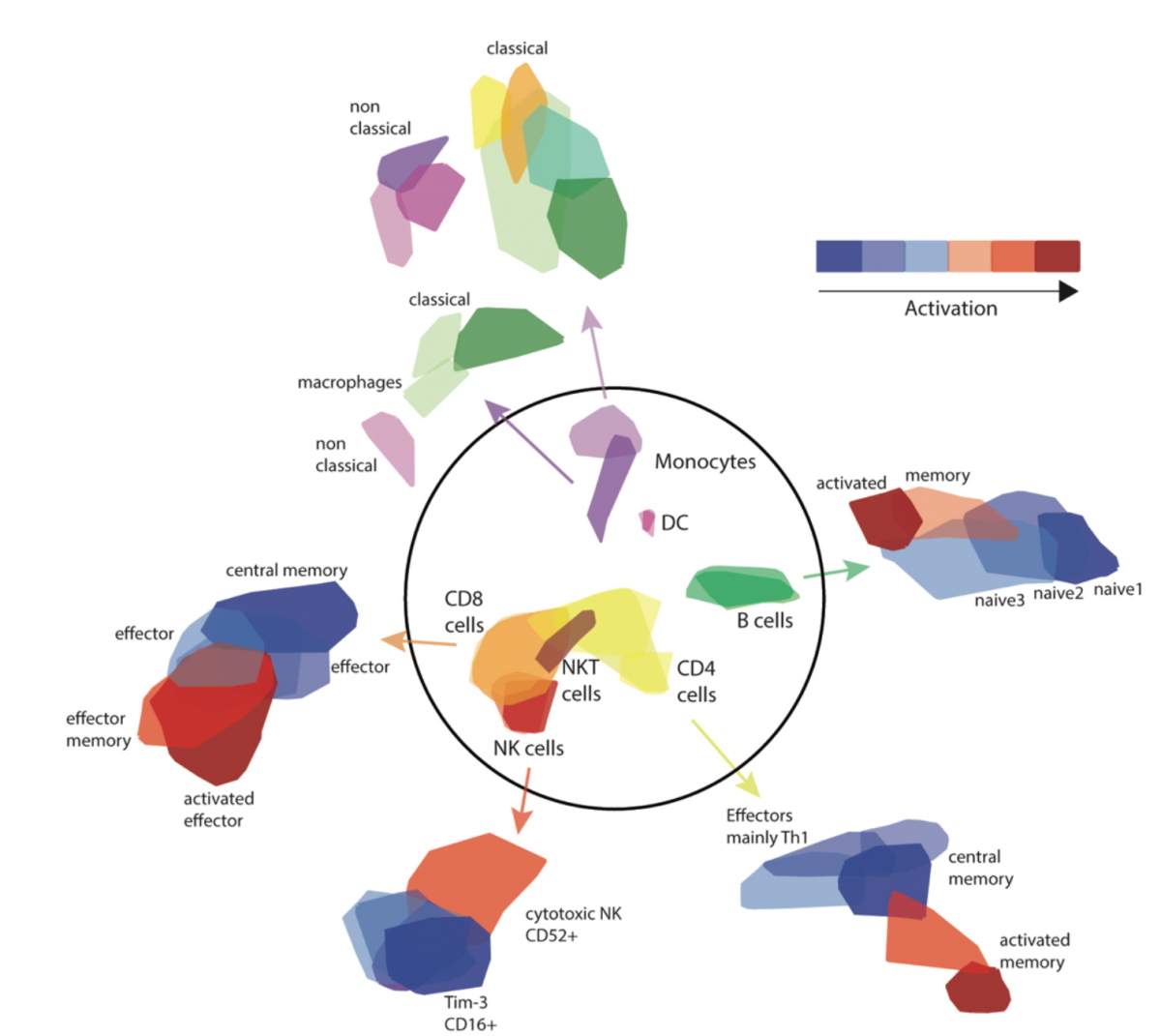 The repertoire of immune cells taken from blood samples after exposure to a bacterium (inside the circle, cell types; outside, subtypes) and their activation levels. Based on an algorithm, the information can be obtained from a normal blood test with no need for expensive genetic single-cell sequencing

Such single-cell sequencing is still limited to specialized labs, however. The group asked whether there was a way to connect their results to real-time blood tests in real patients. For this, they turned to their single cell databases on Salmonella infection and immune responses and developed an algorithm – based on a method known as deconvolution – that would then enable them to extract similar information from standard data sets. This algorithm uses information available from the standard blood tests and extrapolates to the properties of the individual blood cells in the experiments. “The algorithm we developed,” says Bossel Ben Moshe, “can not only define the ensemble of immune cells that take part in the response, it can reveal their activity levels and thus the potential strength of the immune response.”

The first test of the algorithm was in blood samples taken from healthy people in the Netherlands. These samples were infected, in a lab dish, with Salmonella bacteria, and the immune response recorded. Comparisons with existing genomic analysis methods showed that the standard methods did not uncover differences between groups, while the algorithm the group had developed revealed significant ones that were tied to later variations in bacteria-killing abilities.

The group then asked whether the same algorithm could be used to diagnose the onset of tuberculosis, which is caused by a bacterium that often chooses the third way – dormancy — and thus can hide out in the body for years. Up to a third of the world’s population carries the tuberculosis bacterium, though only a small percentage of these actually become ill. Still, some two million die of the disease each year, mostly in underdeveloped areas of China, Russia and Africa. The researchers turned to another database – a British one that followed patients and carriers for a period of two years — so the group could apply the algorithm to blood test results from both groups, as well as from the subset who went from carrier to disease onset during that period.

“We were able to predict, early on, which of the carriers would develop the active form of the disease”
—

The researchers found that the activity levels of immune cells called monocytes could be used to predict the onset or course of the disease. “The algorithm is based on the ‘first impressions’ of immune cells and Salmonella, which cause a very different type of illness than mycobacterium tuberculosis,” says Hen-Avivi. “Still, we were able to predict, early on, which of the carriers would develop the active form of the disease.”

Once tuberculosis symptoms appear, patients have to take three different antibiotics over the course of nine months, and antibiotic resistance has become rampant in these bacteria. “If those who are at risk of active disease could be identified when the bacterial load is smaller, their chances of recovery will be better,” says Avraham. “And the state medical systems in countries where tuberculosis is endemic might have a better way to keep the suffering and incidence of sickness down while reducing the cost of treatment.”

The researchers intend to continue in this line of research – to expand their own database on tuberculosis and other pathogens so to as to refine the algorithm and work on developing the tools that may, in the future, be used to predict who will develop full-blown disease. With the refined algorithm further avenues of research may lead to methods of predicting the course of a number of infectious diseases.

Dr. Roi Avraham’s research is supported by the Merle S. Cahn Foundation; the estate of Zvia Zeroni; the estate of Leah Arbel; and the European Research Council. Dr. Avraham is the incumbent of The Philip Harris and Gerald Ronson Career Development Chair.