Using comprehensive digital questionnaires, Weizmann Institute of Science researchers map out the impact that COVID-19 has had on the levels of mental distress in Israel

During the six weeks between the end of the first COVID-19 outbreak in Israel and the beginning of the second one (late April to early June of 2020), researchers at the Weizmann Institute of Science initiated a study that encompassed more than 12,000 responses from nearly 5,000 respondents to digital questionnaires, in an attempt to assess and understand the mental toll of the pandemic on the country’s adult population. While adults, particularly men, are at greater risk of developing serious illness from COVID-19, the study’s findings show that the pandemic hit women, young adults and the unemployed the hardest in terms of increased mental distress. The new study, published in Molecular Psychiatry, indicates that these groups more frequently developed both physiological and behavioral symptoms associated with such distress – from an increase in heart rate to sleeping disorders. Furthermore, despite the increased risk to certain groups in the Israeli population, the severity of mental distress among the respondents did not appear to be elevated in comparison to past measurements, and was even less severe than the level of distress assessed during times of war and military operations. 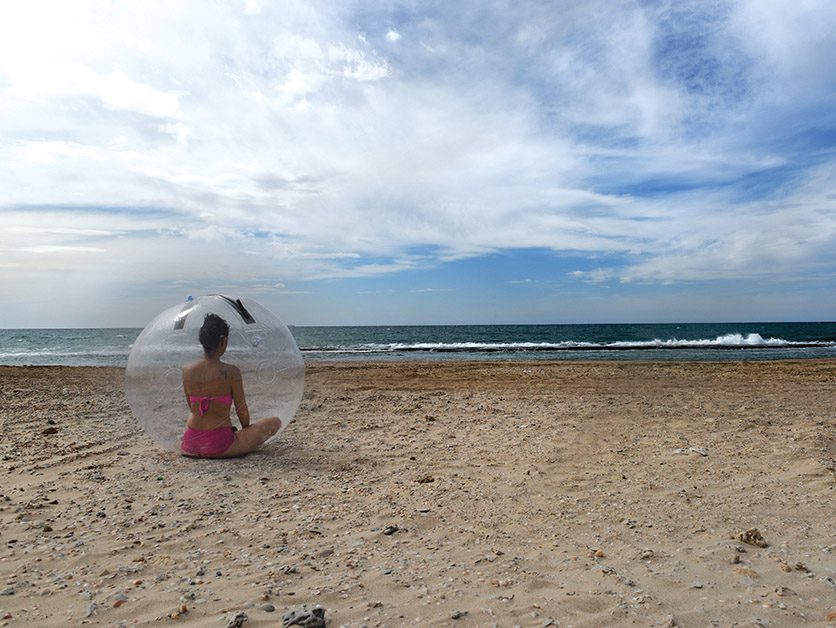 Maskit Golan, "Isolation and staring at the horizon during COVID-19"

In the past, Prof. Alon Chen’s group – a joint research group involving the Weizmann Institute’s Neurobiology Department and the Max Planck Institute of Psychiatry in Munich, Germany – focused mostly on the molecular and neurological aspects of stress and mental disorders. Yet, when the pandemic broke out, like many of us Chen and his group decided to recalculate their route. “It’s not every day that humanity faces a cataclysmic event such as a global pandemic,” says Chen. “Although the far-reaching health and economic aspects received most of our attention during the first few weeks of the pandemic, it was clear from the get-go that the pandemic itself, and the ensuing containment policies that included nation-wide lockdowns, and social and physical isolation, would have a momentous impact on our overall emotional well-being.” Questionnaires aimed at mapping how COVID-19 spread across Israel – developed by Weizmann Institute colleagues in Prof. Eran Segal’s group in the institute’s Computer Science and Applied Mathematics Department – received much attention during these weeks. Researchers from Chen’s group, led by Asaf Benjamin, Noa Eren and Dr. Yael Kuperman, decided to join forces with Segal’s group, adding to the questionnaires an additional chapter that was developed in collaboration with Prof. Orit Nuttman-Shwartz from the School of Social Work at Sapir College and psychiatrist Dr. Maya Amitai from the Schneider Children’s Medical Center of Israel. This additional chapter was dedicated exclusively to the mental and emotional effects of the pandemic, using clinically validated instruments to assess anxiety- and depression-related emotional distress, symptoms and coping strategies.

The association between the two questionnaires – the epidemiological questionnaire and the “mood” questionnaire – acted as a unique force multiplier that underlies the new study’s strongest features: a particularly large data set together with an in-depth characterization of the respondents, which included demographic aspects, and employment, medical, emotional and behavioral data. An additional strong point of the study was that it assessed changes to the respondents’ mood not at the very beginning or at the peak of the outbreak, but rather over a period of six weeks, which enabled the researchers to couple between changes in pandemic dynamics and how they affected emotional well-being. Thus, for example, the study shows that changes in Israel’s new daily COVID-19 cases were reflected in reported mental distress – the larger the daily count, the greater the mental distress, and vice versa.

In addition to young adults, women and the unemployed, other groups were also found to be more susceptible to anxiety and depression. For example, respondents with immune system suppression or those suffering from lung, heart or kidney diseases or hypertension reported elevated levels of general mental distress or greater fear of contracting the virus; respondents with lung or heart diseases or hypertension also reported more symptoms associated with stress. These findings make sense considering the higher medical risk for those suffering from these or a variety of other prior medical conditions. Similarly, respondents who were quarantined, tested for COVID-19 or experienced symptoms associated with COVID-19 reported significantly higher levels of worrying about contracting the virus. On the other hand, respondents who continued to participate in social events and who maintained a seemingly normal social life during the pandemic were less worried about contracting COVID-19 and were generally less distressed – although they were, supposedly, at an increased risk of infection. Another interesting finding was respondents’ use of coping mechanisms to relieve mental distress: Women tended to seek emotional support from their peers, more than men did, while older and elderly respondents coped with the distress by exercising and practicing meditation.

A strong sense of belonging

Even after a year and a half of a destructive global pandemic – with millions dead, a growing global recession and lockdown, quarantine and social distancing policies – we are still far from exposing the full emotional and behavioral impact of this new reality. “Studies coming in from all around the world – from China to Australia – have only just begun to reveal the scope of the pandemic’s effect on mental health. However, at least in the beginning, these studies primarily focused on specific aspects of the initial outbreak or its effect on particular groups, such as medical teams. Our goal was to assess, as much as we could, the long-term effects of the pandemic on the mental health of the general public,” says graduate student Benjamin. “Interestingly, we found out that many of the respondents were less concerned about the possibility of contracting the virus themselves or experiencing individual financial difficulties, but were rather more concerned about a loved-one becoming infected or about how the pandemic was generally affecting society – in Israel and all over the world; these feelings were particularly prevalent among older individuals and respondents living in higher socioeconomic areas,” Kuperman adds. “Care for the other or the collective may imply a strong sense of belonging to a community or to the state. Similar non-self-centered concerns were reported at the beginning of the pandemic in the United States, as well as in Israel at times when the state was facing security threats.”

Prof. Alon Chen is the incumbent of the Vera and John Schwartz Professorial Chair in Neurobiology.

Prof. Chen’s research is supported by the Ruhman Family Laboratory for Research in the Neurobiology of Stress; the Irving B. Harris Fund for New Directions in Brain Research; and Bruno Licht.