This artist’s impression shows two tiny but very dense neutron stars at the point at which they merge and explode as a kilonova. Credit: ESO/L. Calçada/M. Kornmesser

An international research team, including physicists from the Weizmann Institute of Science, has for the first time succeeded in observing a merger of two colliding neutron stars. The merger was simultaneously picked up by three detectors built for this purpose: the two belonging to the Laser Interferometer Gravitational-Wave Observatory, or LIGO, in the United States, and the Virgo detector in Italy. The observation may help determine how such heavy elements as uranium, iodine and gold were formed and enhance our understanding of some of the most violent events in the history of the universe.

The merger was observed on August 17 and announced to the public on October 16. Analysis of the observations is being published in a number of leading scientific journals, including The Astrophysical Journal, Nature,and Science.

Two years ago, in September 2015, the LIGO detectors had already produced a sensational first: They had enabled scientists to observe gravitational waves for the very first time. Those waves, predicted by Albert Einstein a hundred years earlier, had come from a collision between two massive black holes and had taken 1.3 billion years to reach Earth. In the wake of the finding, the 2017 Nobel Prize in Physics was announced earlier this month “for decisive contributions to the LIGO detector and the observation of gravitational waves.”

The newly detected collision and merger of two neutron stars had occurred relatively “recently”: Radiation from the merger had taken “only” about 100 million years to arrive on Earth. But most important, it has provided scientists with more information than the black hole collision. “When black holes collide, the only thing we can detect is gravitational waves, everything else is swallowed inside,” says Prof. Avishay Gal-Yam of Weizmann’s Particle Physics and Astrophysics Department. “But neutron stars are relatively lighter than black holes, so when they collide and merge, a small part of their mass and radiation does escape and can be detected along with gravitational waves.” 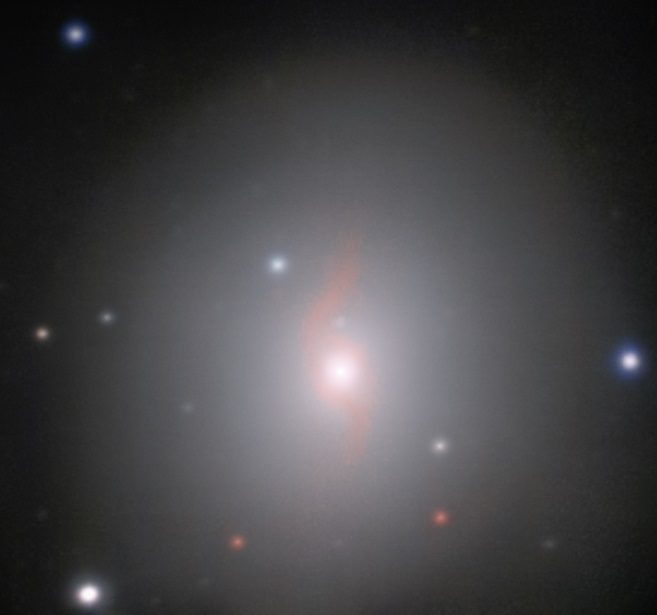 This image from the MUSE instrument on ESO’s Very Large Telescope at the Paranal Observatory in Chile shows the galaxy NGC 4993, about 130 million light-years from Earth. The aftermath of the explosion of a pair of merging neutron stars, a rare event called a kilonova can be seen just above and slightly to the left of the center of the galaxy.. Credit: ESO/J.D. Lyman, A.J. Levan, N.R. Tanvir

As opposed to these waves, which are sensed by detectors for a tiny fraction of a second, the rest of the radiation from the neutron star collision glowed for several days. This came in more conventional forms, including X, gamma, ultraviolet and infrared rays, as well as visible light. “Numerous telescopes had spotted this radiation as a new dot in the sky, but at first we weren’t sure this dot was the star collision picked up by LIGO and Virgo,” says Prof. Eran Ofek, also of Weizmann’s Particle Physics and Astrophysics Department.

Scientists around the world, including Prof. Ofek’s team at the Weizmann Institute, analyzed the data from the collision, ultimately confirming that the dot was indeed the optical signature – that is, the optically observable event – of the neutron star merger picked up by the detectors. In particular, Ofek and other scientists showed that the radiation had, in all likelihood, come from a neutron star merger. The researchers established that the emitted matter amounted to about a hundredth the mass of the sun, and that this matter moved at about a quarter of the speed of light. “It’s the first time that such a large mass has been shown to move at such an enormous speed,” Ofek says.

Spectroscopic analysis of the radiation, performed by Gal-Yam and other scientists, supplied evidence that the merger had resulted in the formation of heavy elements. Researchers have a fairly good idea of how light elements had been formed, but the origin of the heavy elements had long been a mystery. One theory had suggested that a plausible source is neutron star mergers: These stars contain so many neutrons in condensed form that a star collision, causing a rapid bombardment of these neutrons against one another, could create favorable conditions for the formation of the neutron-rich nuclei characteristic of the heavy elements. “This theoretical prediction had been made at least half a century ago, and now we finally have evidence that this might indeed have been the case,” Gal-Yam says. “Every element in nature emits and absorbs light in a different part of the spectrum, and that’s how we could tell which elements had emitted the detected radiation.”

Among the heavy elements identified by the scientists were such exotic ones as tellurium, but also such more common ones as cesium and iodine. “Our findings suggest, among other things, that every atom of iodine on Earth, including the iodine you put on your wound, had arrived here in the distant past from a merger of neutron stars,” Gal-Yam says. He adds that such extremely heavy elements as gold and uranium are also thought to have been created in neutron star mergers, but for reasons that are not yet understood, they were not identified in the current merger.

Ofek and Gal-Yam are part of several large scientific collaborations analyzing the data from the neutron star merger. Further analysis of the data promises to shed additional light on the origins of heavy elements and provide answers to other unresolved questions about the nature of gravity and the explosive deaths of stars.

Prof. Avishay Gal Yam’s research is supported by the Benoziyo Endowment Fund for the Advancement of Science; the Yeda-Sela Center for Basic Research; the Deloro Institute for Advanced Research in Space and Optics; and Paul and Tina Gardner. Prof. Gal-Yam is the recipient of the Helen and Martin Kimmel Award for Innovative Investigation.