Dr. Binghai Yan, who recently joined the Condensed Matter Physics Department of the Weizmann Institute of Science, says that he is a theoretical physicist who works on experimental research. That is, he investigates the properties of intriguing new materials with mathematics and simulations, and he proposes new experiments based on his findings. Thus, for example, in research that was recently published in Nature, Yan and his collaborators from Germany, Switzerland and the United States proved a long-sought fundamental concept called gravitational anomaly, which was hailed as a finding that will “bring us closer to a black hole’s mysteries.” Gravitational anomaly had been predicted in certain circumstances in some of the most basic physics equations, including the rotation of neutron stars and the earliest universe, but had never been observed. It was thought to be an effect so small, it would be seen only in the warping of space-time next to black holes or a moment after the Big Bang – or, possibly in a complex high-energy experiment. Instead, the team realized it by measuring the thermoelectric conductance in a piece of material called Weyl semimetal NbP – a substance recently discovered in Yan’s research.

“This produced an analogue of curved space time…”

What’s special about a Weyl semimetal? It harbors fundamental particles called Weyl fermions. Their spin – a property of quantum particles something like the spin of a football – is either parallel or anti-parallel to the direction of motion. That is, the spin and motion are locked – a phenomenon referred to in physics as chirality. These Weyl fermions are thus, by their spin, either “left-handed” or “right-handed.” This chirality is what makes Weyl fermions ideal systems for seeking anomalies – phenomena that break those fundamental laws of quantum mechanics that require particles and spin numbers to be conserved. Gravitational anomaly shows up, for example, in quantum field theory, in which curved space-time can induce an imbalance between left- and right-handed particles, upsetting the so-called conservation of parity between the two. Dr. Johannes Gooth, who conducted the experiment and is currently a postdoctoral fellow at IBM Research – Zurich, applied a temperature gradient and a magnetic field to the Weyl semimetal in the lab.  This produced, says Yan, an analogue of curved space time, and it enabled them to observe a gravitational effect on the Weyl fermions. That work opens the door to further experimental exploration of previously undetected quantum field effects. 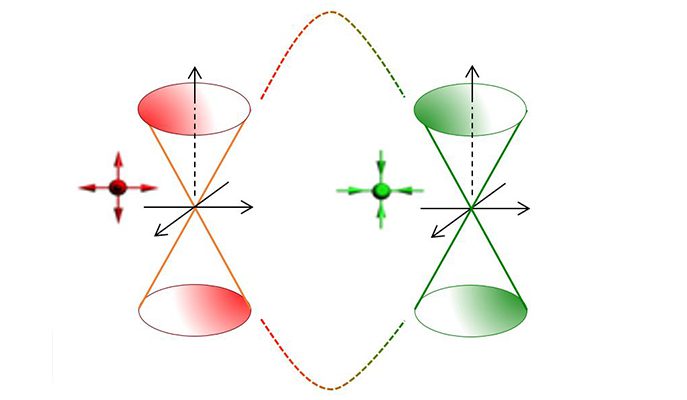 The hourglass like energy-momentum relation in a Weyl material, which is the origin of peculiar physics phenomena. The nodal point of each hourglass is a “magnetic” monopole in the momentum space. Red and green ones have opposite monopole charges, + and –, respectively

Weyl semimetals belong to a relatively new class of materials known as topological materials – solid materials with exotic electronic properties. These materials originate from the mathematical concept of topology, and they were celebrated by the 2016 Nobel Prize in Physics. Yan intends to continue investigating the unique characteristics of these materials and to dream up new ones. He believes some of these could have interesting optical and magnetic properties that may enable further experimenation in the physics of strange particles and quantum behaviors. In addition, such materials could have practical uses – for example, they might be used to create new means of data storage and even a quantum computer.

At home in Israel

Although Yan has been at the Weizmann Institute of Science for only a few months, he says he feels at home. He was born in Northern China, not far from Beijing, and received his PhD from Tsinghua University. He went on to do postdoctoral research at the University of Bremen in  Germany; at Stanford University in the US; and later at the Max Planck Institute for Chemical Physics of Solids in Germany. During this time, he forged relationships with several Weizmann physicists, with whom he is continuing to work now that he is at the Institute. He says. “I collaborate with researchers here on both the fundamental theory and the experimental measurements, as well as with the group in Germany for fabricating the materials. Together, we make a very nice team.” In his recent collaboration with Dr. Haim Beidenkopf, an experimental senior scientist at the Institute, they “saw” the Weyl fermions for the first time, using scanning tunneling microscopy.

Yan is married to Huanhuan Wang, currently a doctoral student in the group of Prof. Dan Yakir of the Institute’s Earth and Planetary Sciences Department. The couple have two children, aged almost two and four, and Yan says that he and his wife especially appreciate the quality of the kindergarten and child-care facilities at the Institute.

Dr. Binghai Yan’s research is supported by the Ruth and Herman Albert Scholars Program for New Scientists;  and the Willner Family Leadership Institute for the Weizmann Institute of Science.