From left: Jean Monet and Jon Plens visiting a winery in France (2019).

Worldwide it’s estimated that 44 million people live with dementia—a population greater than all of Canada. Alzheimer’s is the most common form of dementia, contributing to 60 – 70 per cent of all cases.

When Montreal-based Jon Plens and his partner of 39 years, Jean Monet, were discussing charitable giving alternatives, their interest in supporting Alzheimer’s research was also directly related to personal impact.

Having experienced the suffering of Jon’s late mother, Jean’s late mother and two aunts, the couple knew that they wanted to support the research that will hopefully one day find the answers to prevent, manage and aid anyone living with Alzheimer’s.

In Canada, approximately 747,000 individuals are living with Alzheimer’s or another dementia. According to the Alzheimer’s Society, a staggering “1 in 5 Canadians have experience caring for someone living with dementia.”

“We all recognize the many philanthropic opportunities that come knocking. I am hopeful by elevating the awareness of Weizmann, others will find the personal and emotional connection to Weizmann initiatives and recognize the value of giving.”
— Jon Plens

With no cure or drug treatment to prevent dementia/Alzheimer’s, the couple felt strongly about supporting this research. And, there is reason to believe that life-changing discoveries in Alzheimer’s are around the corner. In July 2020, research reported that approximately one-third of dementia cases could be prevented within the next 25 years through additional research.

When asked ‘why science?’ or ‘why Weizmann?’ Jon is quick to respond that Weizmann is at the forefront of several research areas and because of its reputation, the Weizmann Institute is uniquely positioned to have significant global impact through further scientific discovery. (> Read recent scientific developments)

“I realized quickly that the broad research would be of interest, and touch the lives of just about anyone I know,” says Jon. “The Institute is highly rated and has an impressive reputation of attracting the best and brightest global talent to the campus.”

Weizmann had 1,610 studies published in its various research disciplines in 2019 and its research was cited 7,899 times by other scientists globally in the last year, which further contributes to its respected global standing. (> Read more Facts and Figures)

In a very difficult year, research shows that trust in science has been elevated to unprecedented levels in Canada and around the world.  Jon further reflects that the COVID-19 pandemic clearly demonstrates that the answers will only be found in science.  (> Read more about COVID-19 research)

Answers that Jon and Jean similarly hope to find in Alzheimer’s research and beyond.

“We all recognize the many philanthropic opportunities that come knocking. I am hopeful by elevating the awareness of Weizmann, others will find the personal and emotional connection to Weizmann initiatives and recognize the value of giving,” adds Jon. “There is transparency of your dollars at work.”

Related Stories
Donor Spotlights
Volunteer spotlight: Susan Kellner
Toronto chapter member, Susan Kellner, discusses how she first got involved with the Weizmann community and her interest in getting youth curious about science. In this...
Learn More 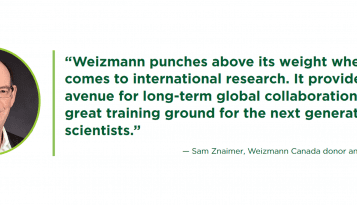 Donor Spotlights
Donor spotlight: Sam Znaimer
Passionate about how science can make a difference in our world, Sam Znaimerm, Weizmann Canada donor and volunteer reflects on getting involved with the Weizmann community...
Learn More