The main scientific instrument on board the Israeli Beresheet spacecraft, the SpaceIL Magnetometer (SILMAG), has now been successfully turned on in space and data returned to Earth. After its successful launch, Beresheet is circling Earth on its journey to the Moon. Prof. Oded Aharonson of the Weizmann Institute of Science is heading the team that is currently analyzing the SILMAG information to evaluate the health and accuracy of the instrument in space, as well as recording the magnetic signature of the spacecraft itself, which will then be subtracted from the measurements made on the Moon.

Measuring the magnetism of lunar rocks will enable researchers to address outstanding questions about the Moon: how it acquired its magnetic field, and when in its history this occurred.

Aharonson and his team of scientists, working with the SpaceIL engineers, have identified a landing site for the Beresheet lander. The selection criteria focused on ensuring a safe landing, searching for sites with relatively few craters, exposed rocks or steep slopes within the landing area that could jeopardize the touchdown. In addition, the scientists searched for a location on the Moon where the crust is magnetic, so as to allow the magnetometer on board the spacecraft to carry out its investigation.

The landing site was selected together with Prof. Jim Head of  Brown University, a member of the SpaceIL team who worked with the NASA Apollo program on landing site selection, among other things. “On the basis of our experience with Apollo, the Serenitatis sites favor both landing safety and scientific reward,” he said. 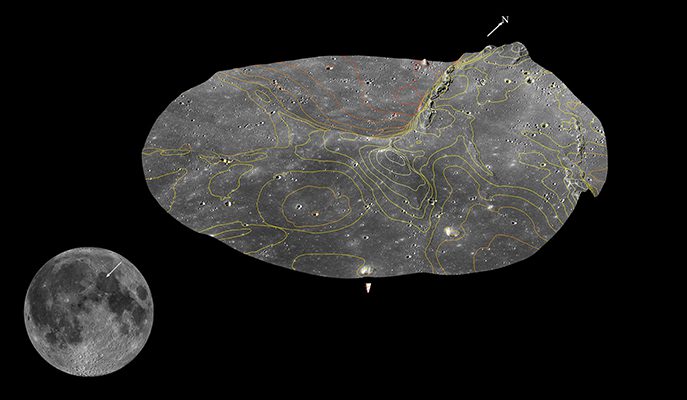 The chosen site is located in the northeastern part of Mare Serenitatis, a few hundreds of km east of the Apollo 15 landing site and a similar distance northwest of the Apollo 17 site. Three optional landing sites (primary and two backups) were identified. The terrain in these locations is composed of material characteristic of ancient mare surfaces on which successful landings have been made (most recently Chang’E 3 and 4). “Lunar magnetism has been an enigma for decades. It is a privilege to be part of this mission that’s taking one more step towards solving it,” said Aharonson.

The Beresheet spacecraft is currently orbiting Earth and performing maneuvers in preparation for lunar orbit insertion in early April, followed by the planned landing at the chosen site.

Prof. Oded Aharonson’s research is supported by the Helen Kimmel Center for Planetary Science, which he heads; the Minerva Center for Life under Extreme Planetary Conditions; the Zuckerman STEM Leadership Program; and the Adolf and Mary Mil Foundation.