Subscribe today
Donate
Donate
Menu
> Press Release > All Too Human
Press Release | News From The Institute
All Too Human
The price we pay for our advanced brains may be a greater tendency to disorders
Source: The Weizmann Institute of Science 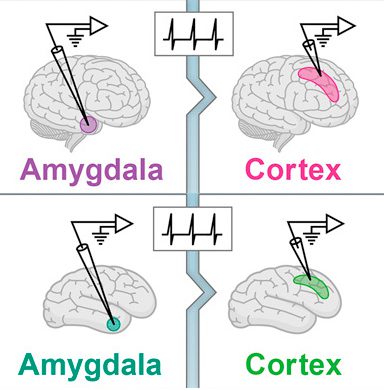 The tradeoff in human brains (top) and monkey brains (bottom). The more evolutionarily advanced, the more efficient and the less robust each area proved to be

Prof. Rony Paz of the Weizmann Institute of Science suggests that our brains are like modern washing machines – evolved to have the latest sophisticated programming, but more vulnerable to breakdown and prone to develop costly disorders. He and a group of researchers recently conducted experiments comparing the efficiency of the neural code in non-human and human primates, and found that as the neural code gets more efficient, the robustness that prevents errors is reduced. Their findings, which recently appeared in Cell, may help to explain why disorders as ADHD, anxiety, depression, PTSD and even autism are common in humans.

Paz, in the Institute’s Neurobiology Department, says that anatomical differences between humans and other primates have been described – particularly our large pre-frontal cortex and its extended number of neurons. But differences in the neural code – the “software,” in contrast with the “hardware” (the physical structure) – have not been explored.

Raviv Pryluk, a research student in Paz’s group, devised a way to test and compare the efficiency of the neural code in several regions of the brain. “We defined efficient communication as that which uses the least amount of energy to transmit the maximal information – to pass on as complicated message as possible with the fewest ‘words’,” says Pryluk.

The researchers recorded the electric activity of single neurons both in humans and in macaque monkeys in two regions: the pre-frontal cortex, where higher functions like decision making and rational thinking occur, and the amygdala, a more evolutionarily ancient region that is responsible for the “fight or flight” basic survival functions, as well as emotions. Paz and his group worked in collaboration with Prof. Itzhak Fried of Sourasky Medical Center in Tel Aviv and UCLA Medical School in Los Angeles. Patients with pharmacologically intractable epilepsy come to Fried to have electrodes implanted for diagnostic purposes, and these provide a rare opportunity to record the electric activity of single neurons in the human brain. Also participating in this research were Dr. Hagar Gelbard-Sagiv of Tel Aviv University and Dr. Yoav Kfir, at that time a research student in Paz’s group.

“There may be a zero-sum game between efficiency and robustness”
—

The findings of this research provided support for the “washing machine” theory of brain evolution: The neural code in the “more evolved” pre-frontal cortex is more efficient than the amygdala, both in humans and monkeys. And the neural code of both areas in the human brain was more efficient than its monkey counterpart. But the higher the efficiency of a particular neural code, the less it was robust to errors. Paz likens the amygdala to the washing machine drum: “It’s not highly sophisticated, but it is less likely to fail – which is important to animals’ survival,” he says, adding: “The lower resistance of the human amygdala to errors may play a role in exaggerated survival-like responses in inappropriate contexts, such as those we see in PTSD and other anxiety disorders.”

Pryluk: “Evolution works with trade-offs. There may be a zero-sum game between efficiency and robustness; and our complex, multidimensional brains have gained one at the price of the other.” Fried: “Comparing single-cell recordings from human and monkey brains is a large step forward toward answering the question of what makes the human brain unique.” Paz adds: “Why, on the one hand, do humans have such superior learning, cognitive and adaptive abilities and, on the other, this tendency to anxiety, depression and other mental diseases? We have shown that these may be two sides of the same coin.”