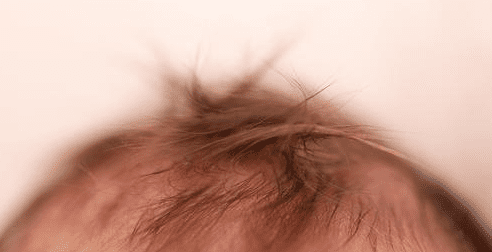 Parents of newborns will describe in detail, to anyone willing to listen, the wonder that is their baby’s smell – and they might not be in the wrong. A new study by researchers at the Weizmann Institute of Science suggests that a molecule excreted by humans, and perhaps particularly by babies, plays an important social role: regulating aggression in adults.

The study, led by Dr. Eva Mishor from Prof. Noam Sobel’s research group at Weizmann’s Brain Sciences Department and the Azrieli Institute for Human Brain Imaging and Research, has found that a molecule that can likely be sensed by all mammals, and that is found in abundance on the scalps of newborns, sparks brain and behavioral changes in adults who are exposed to it. 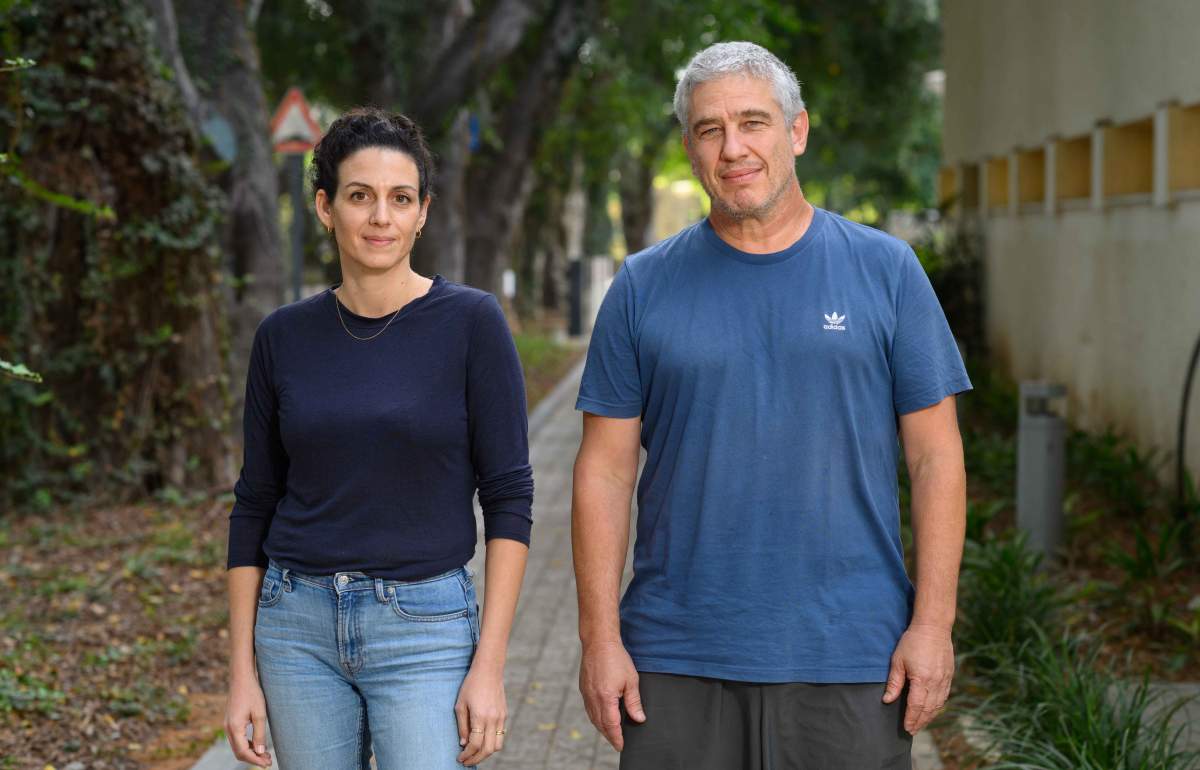 Moreover, the study, published today in Science Advances, found that the molecule affects women one way, and has the opposite effect on men. The molecule, the researchers found, decreases connectivity in parts of the brain that regulate social decision making in women, while in men it increases this connectivity. These brain differences may underlie the different behavioral outcomes.

The finding is among the first to provide a direct link between human behavior and a single molecule picked up through the sense of smell. Furthermore, the diametrically opposed change it effected in women and men sheds new and surprising light on the mediating role sex plays in olfactory perception and its resulting neurological processes.

All animals excrete molecules that give off certain cues that are perceived through our olfactory faculties. Studies have shown that they can also have clear socal and behavioral effects on mammals. However, the science behind how humans are affected by these social cues of chemical communication is still limited.

In their study, Mishor and Sobel focused on a molecule called hexadecanal, or HEX, that humans emit and that most mammals can sense. “We found that HEX has no perceptible odor, but that when you sniff it, it affects the way you behave toward others – specifically, your aggressive responses to others,” explains Mishor. 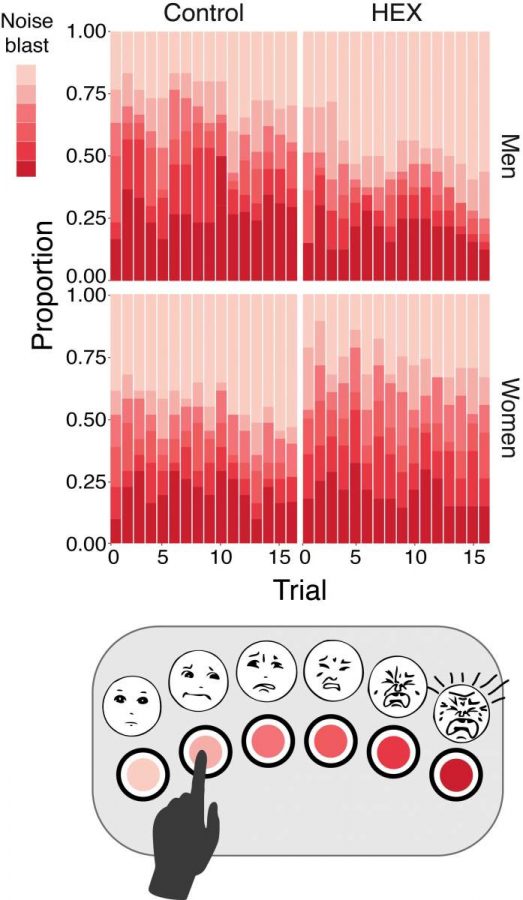 Participants in the experiment were offered an outlet for their aggression in the form of blasting their purported game partner with loud, unpleasant noises. The louder the noise blast, the higher the measure of aggression. Women exposed to HEX consistently selected louder noise blasts than women in the control group. Yet the opposite effect was observed for men: Those who were exposed to HEX consistently selected milder noise blasts than those who were not exposed to the molecule

HEX was previously suggested to be a “social buffering” chemosignaling agent. For example, it reduces stress in mice when excreted by their fellow cagemates. However, the question of whether it plays a similar role in humans was unknown.

The study utilized two validated scientific methods for gauging aggressive behavior in humans, the so-called “aggression paradigms” known as TAP and PSAP. The researchers used the TAP method on about 130 human participants, half of whom were exposed to HEX, and half to a control substance. The PSAP method was used on about 50 additional participants, each exposed to both HEX and the control. The goal was to see if HEX served as a chemosignaling cue that impacted aggressive behavior and associated brain mechanisms. 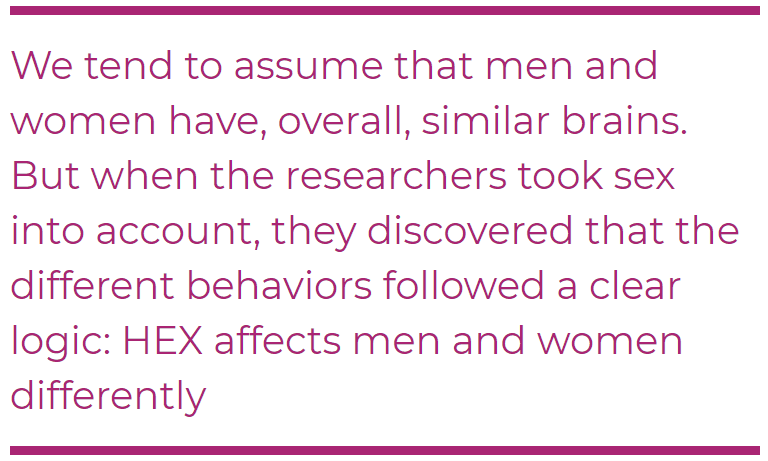 The computer was purposefully annoying, goading its human playmates as a form of provocation. For example, in the first game, which required divvying up money, the computer would offer to keep most of the funds for itself. This game was followed by a second game, which allowed the humans to “punish” their interlocutor with a loud audio blast. This was used as a metric for gauging aggressiveness – the louder the blast, the more aggressive the participant was judged to be.

Mishor found that those that were exposed to HEX exhibited different behaviors from those who were not exposed to it. However, the scientists were surprised to see that the results seemed inconsistent. 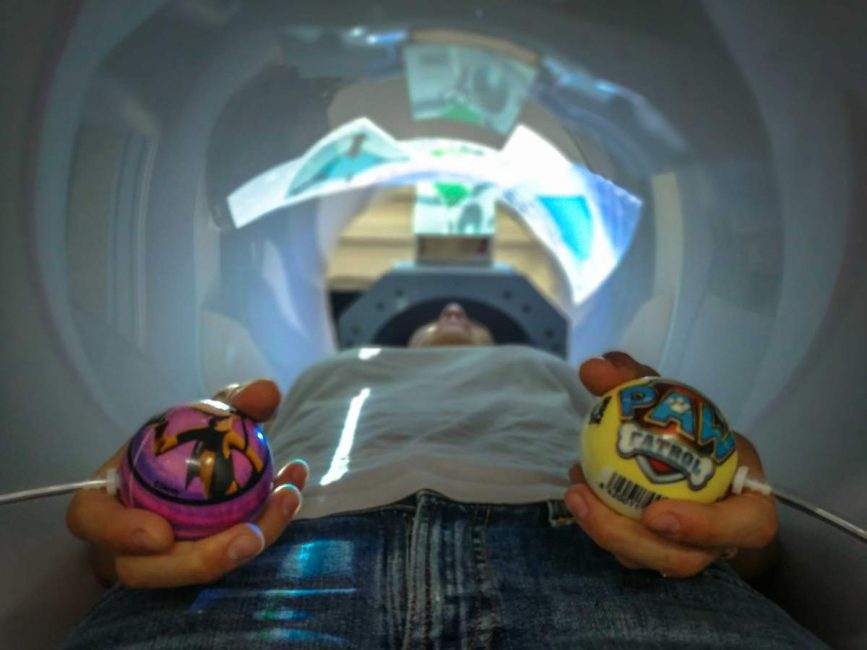 Illustration of an fMRI experiment. The experimental setup made innovative use of pressure-measuring balls that allow participants to express their aggression in a more natural manner. Photo: Ofer Perl

“I am very sensitive to matters of gender, and it was very important for me to include women in our study,” notes Mishor. We tend to assume that men and women have, overall, similar brains. But when the researchers took sex into account, they discovered that the different behaviors followed a clear logic: HEX affects men and women differently. While females exposed to the molecule exhibited increased aggression in comparison to female participants in the control group, male participants behaved oppositely, and their aggression decreased.

Why would this molecule affect the sexes differently? Mishor suggests an evolutionary explanation: “Male aggression translates many times into aggression toward newborns; infanticide is a very real phenomenon in the animal kingdom. Meanwhile, female aggression usually translates into defending offspring,” she says, explaining how the sex-differentiated outcome can help babies survive. 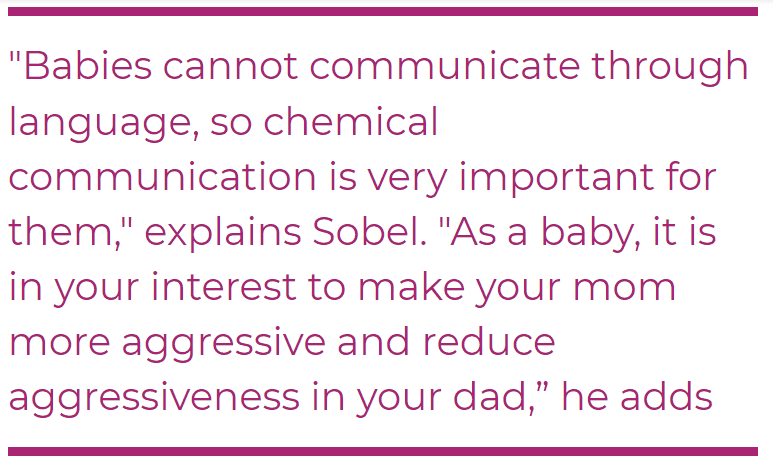 To examine this hypothesis, they reached out to researchers in Japan who had been studying babies, specifically the molecules excreted from their scalps. This led them to discover that HEX “is among the most abundant, if not the most abundant molecule in the aromatic bouquet found on a baby’s head,” Sobel mentions.

“Babies cannot communicate through language, so chemical communication is very important for them,” explains Sobel. “As a baby, it is in your interest to make your mom more aggressive and reduce aggressiveness in your dad,” he adds.

To further validate their results, the researchers used the second aggression paradigm method, which allows the imaging of brain activity during the provocation and aggression stages. In this case as well a marked difference was found between men and women. 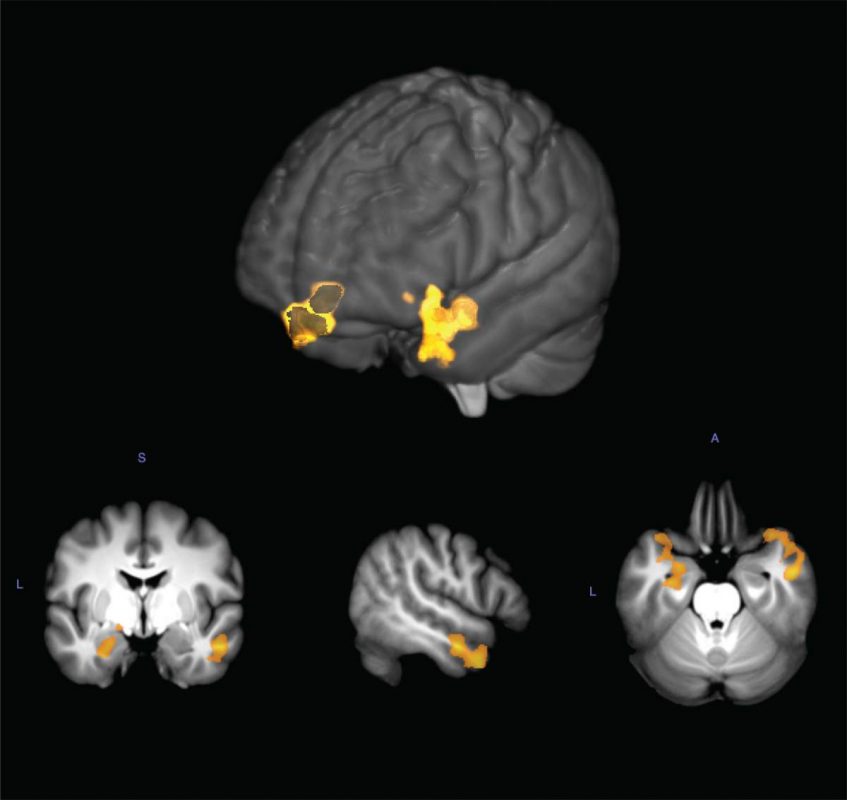 A 3D reconstruction of the brain, displaying the brain regions where the difference between women and men was most pronounced (yellow-orange). For both female and male participants, the researchers showed that HEX modulated the way the angular gyrus, a brain region that integrates social cues, talks with areas of social-emotional decision making. This may imply that HEX exerts its effect by altering social control over emotional reactivity

There is no single area in the brain associated with aggression. Rather, aggressive behavior is linked to networks of communication between different parts of our brain that regulate the way we process social cues and either abide by them or ignore them.

fMRI scanning revealed that though men and women similarly perceive HEX as having no odor, their neurological response to it was radically different. In both sexes HEX activated the left angular gyrus, an area implicated in the integration of social cues. However, the way that it ”talked” to other brain regions was sex dependent.

“HEX, it would seem, affects men in that there was more social regulation, their aggression was kept in check and it served as a ‘cool down’ signal for them, while in women the regulation decreased and it can be thought of as a ‘set free’ signal,” explains Mishor. In other words, the communication between the parts of the brain that are in charge of social regulation, and thus help keep aggression in check, differs in men and women.

“Like all mammals, humans sniff themselves and each other all the time,” explains Sobel. Now, perhaps we know the outcome of sniffing newborns and have a better understanding of the mechanisms involved, and of its possible evolutionary role.

Prof. Noam Sobel is the incumbent of the Sara and Michael Sela Professorial Chair of Neurobiology.

Prof. Sobel’s research is supported by the Azrieli National Institute for Human Brain Imaging and Research; the Sagol Weizmann-MIT Bridge Program; the Nadia Jaglom Laboratory for Research in the Neurobiology of Olfaction; the Rob and Cheryl McEwen Fund for Brain Research; Miel de Botton; and Sonia T. Marschak.