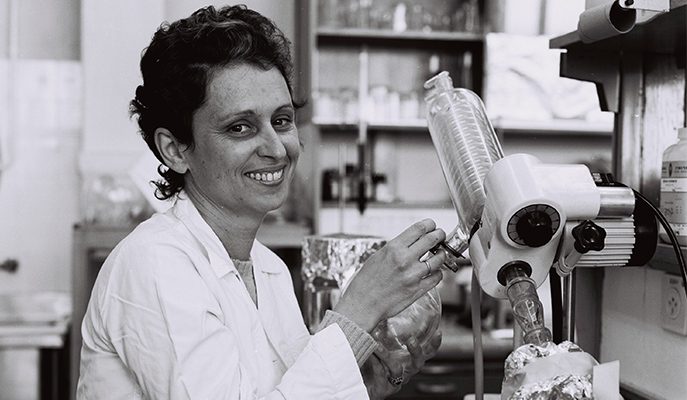 Prof. Ada Zamir in 1972, the Weizmann Institute of Science

Prof. Ada Zamir still remembers the first day she came to work at the Weizmann Institute of Science, in the mid-1960s, excited to begin researching with Prof. David Elson.

Ada Zamir, nee Kleinman, was born in Tel Aviv, to a father who had immigrated from Poland in 1920 and a Russian mother who immigrated in 1926. Ada’s father was a leather worker, and the family made their living from his small workshop on Levinsky Street. Eventually her father expanded the workshop and sold all sorts of leather goods – belts, bags and suitcases – and her mother helped out in the shop. Ada was their only daughter, and they had her enrolled in the prestigious Herzliya Gymnasium – an exclusive high school – from the time she entered first grade. In return, Ada did her parents proud, excelling in her studies.

The War of Independence broke out while Ada was in high school. The principal of the school gave talks nearly every morning, speaking about Zionism and love for the new country. She can still hear his voice, vibrating with feeling as he said “we’ll hold onto this land by our very fingernails.” Already in high school she fell in love with chemistry and decided to pursue the subject in the future.

The next thing she knew, she had been asked to go on the mission to represent Israel to groups in the US

From high school she went straight into the army, into a Nahal unit that would found Kibbutz Tel Katzir. During her unit’s training on Kibbutz Degania, a fellow soldier told her he had been chosen for a mission to the United States, but the young woman who was supposed to join him had dropped out. Ada suggested jokingly that he take her instead, and he took the idea seriously. The next thing she knew, she had been asked to go on the mission to represent Israel to groups in the US.

She flew to the US in December 1949, for three months. She carried travel papers, as the new country was not yet issuing passports, and the journey, which took 36 hours in those days, could just as well have been taking her to Mars as far as Ada was concerned. In the US, each member of the group stayed in each place for two weeks, giving talks to local groups about Israel. It was on her stop in New Jersey that her host, impressed with the bright, pleasant young woman, decided she should meet Albert Einstein. Although he did not know Einstein, personally, he called in her name to request a meeting, and Einstein ended up inviting Ada to his home.

In 1950 she began her studies at the Hebrew University of Jerusalem, in chemistry and microbiology. She completed an MSc in biochemistry under the guidance of Prof. Noah Lichtenstein, on measurements of glutamic acid. During this time, she married David (Dudik) Zamir, a physics student.

This discovery would assist the Institute’s Prof. Ada Yonath in her quest to solve the structure of the ribosome

The couple moved to Haifa for Dudik’s work, but Ada took an enforced break in her studies, as the Technion had not yet opened a life sciences faculty. During this break, her daughter Yael was born. The first biochemistry lab opened there in 1957, headed by Prof. Ruth Ben-Ishai. Ada joined her – the first student in the Technion’s life sciences faculty. The equipment was minimal and the conditions far from ideal, but Ada finished her doctoral work there, researching metabolic pathways.

Ada’s family accompanied her on her next step – postdoctoral research at Cornell University in the US, where she worked under the guidance of Prof. Robert Holley, while Dudik conducted his own postdoctoral research in Cornell’s physics department. Holley’s subject was transfer RNA: Holley was the first to discover these molecules and elucidate their role in synthesizing proteins. Ada’s work in his lab contributed to deciphering the genetic code for these RNAs. During this time, pregnant with her son, Gideon, Ada found herself having to run up and down stairs in order to separate out the nucleic acids for sequencing. In 1968, Holley would receive a Nobel Prize for this discovery.

Ada joined Elson’s group at the Weizmann Institute in 1964, and she turned to researching ribosomes – the cells’ protein factories. She also began collaborative research with Prof. Meir Wilchek that would, over the years, deepen and bear fruit. Around this time, she would give birth to her third child, Naomi. Together with Elson and Prof. Ruth Miskin, Ada would develop a method of activating ribosomes. This discovery would assist the Institute’s Prof. Ada Yonath in her quest to solve the structure of the ribosome – work that would earn her a Nobel Prize in 2009. 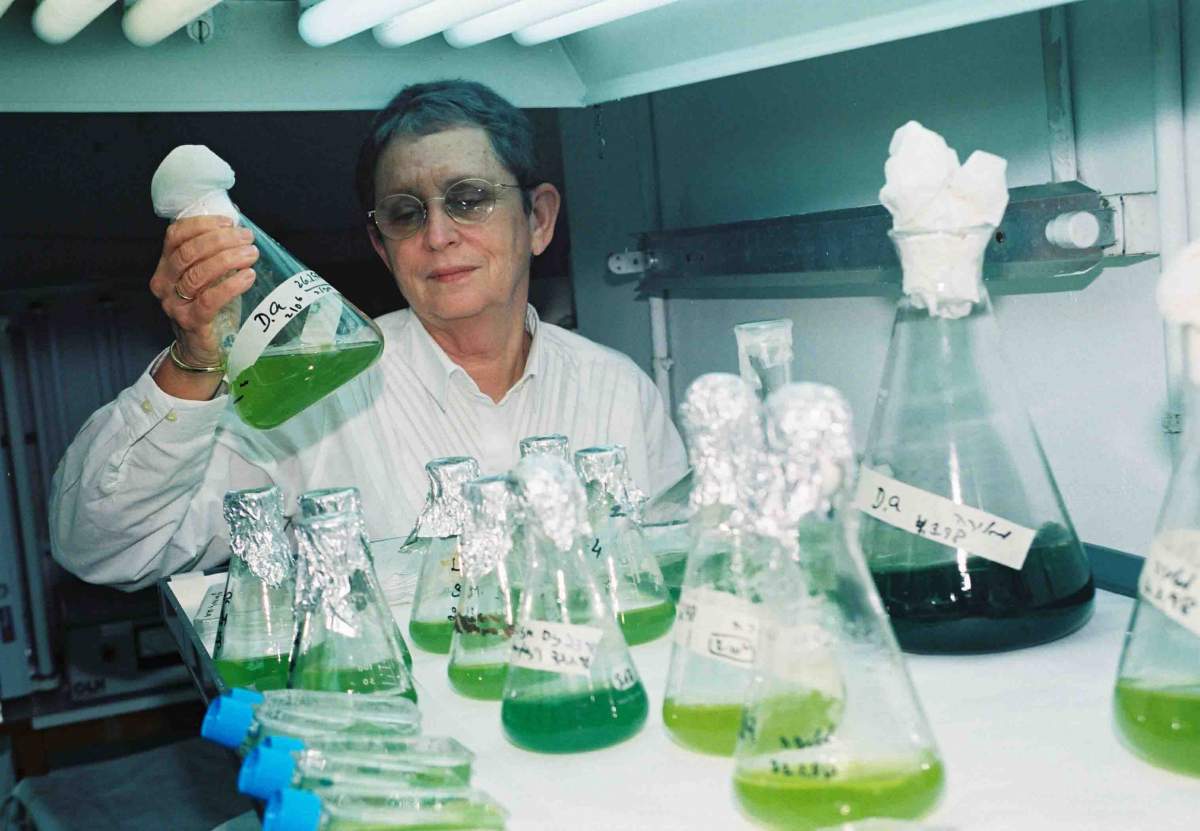 Zamir’s lab was next to that of Prof. Mordhay Avron, who had isolated and investigated the single-celled alga Dunaliella. This alga is notable because it survives in the extreme conditions of the Dead Sea. Ada, working with other researchers at the Institute, uncovered the enzyme that enables Dunaliella to live in the harsh, salty environment of the Dead Sea. Surprisingly, her findings provided insight into the workings of the kidneys, which also deal with high levels of salt.

Ada Zamir was the first woman to head the Scientific Council of the Institute (1985-87), and she has been Head of the Biochemistry Department, Director of the Charles and Tillie Lubin Center for Plant Biotechnology, a member of Israel’s Higher Education Council, and Dean of the Faculty of Biochemistry-Biophysics (which underwent a change in name and structure in the 1990s, during her second term).

Surprisingly, her findings provided insight into the workings of the kidneys, which also deal with high levels of salt

In addition to helping in the work for which two Nobel prizes were awarded, Zamir’s work contributed to the development of new fields on the cutting edge of science. She continued her scientific work for many years after her official retirement. She attributes her success, in part, to the unique character of the Weizmann Institute, where freedom of choice is a given and collaboration among scientists from diverse fields is encouraged. She remains in close contact with many of the numerous students who passed through her lab, and she takes pride in their achievements. Among them is Prof. Nahum Sonenberg, a professor at McGill University, Montreal, Canada, whose honors include a Wolf Prize in Medicine.

Creating this disparity between the inner and outer cells was an informed choice on the part of the scientists. It was known, for example, that cell motility drops the more closely a cell is surrounded by others. In contrast, cells in tissue – cells that are meant to stay put — have been observed moving when an empty space opens up, as in cases of injury. So the scientists added to their model the stipulation that cells that have fewer neighbors – e.g., those on the outer edges of the cluster – would be more motile.

Although the researchers used cancer cells in their experiments, the model should hold for other kinds of cell migration. This study was the fruit of collaboration between physicists and biologists, and it was led by research student Katherine Copenhagen in the group of Prof. Ajay Gopinathan in the University of California at Merced.

Models of collective movement are usually uniform, giving each unit the same properties. But this research – in starting with a system that was not uniform – demonstrated how new behavior can arise, even when the basic rules of the system have not changed. “And one of the mechanisms that leads to new behavior is frustration,” says Gov. Gov is a physicist who investigates collective movement in groups of living things, and the study’s findings, he says raise new questions: “Animals that travel in flocks sense their neighbors and use their brains to make decisions based on this information. But cells do this without eyes or ears, and without complex information-processing abilities. We assumed these abilities in our model, but it will require more research to unlock the mechanisms in cells that enable them to migrate in clusters.”

Prof. Nir Gov is the incumbent of the Lee and William Abramowitz Professorial Chair of Biophysics.